I didn't get to see everything I wanted to this past VIFF, though I did pretty well considering. In particular, I recall racing out to see Holy Spider at the Playhouse one evening. Friends were going, the buzz was strong, and it couldn't have been more topical: Iranian women (and some men, even non-Iranian ones) were protesting pretty avidly at that point, at the Vancouver Art Gallery and elsewhere around the world, over the death of Mahsa Amini, who was in the custody of the morality police at the time for the crime of not having her hair covered (interesting, nuanced article about that here). What better time to see a film about an Iranian serial killer, Saeed Hanaei, whose predations on prostitutes and addicts - he killed sixteen women - were welcomed by some sectors of the public in Iran, who argued he was cleaning up the streets, getting rid of "corrupt women" who were a blight on Iranian society... especially given that the film implies that authorities dragged their heels in catching Hanaei, with filmmaker Ali Abbasi going so far as to invent a character, a female journalist, who is ultimately responsible for Abbasi's capture? 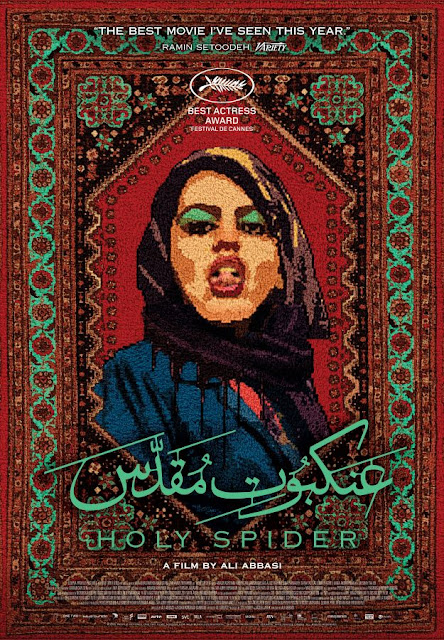 Alas, the lineup for the film that night was so long by the time I made it to the theatre that I was told that there was no hope of my entry; I consoled myself with the equally remarkable (and also quite feminist and topical) film Klondike a few blocks away. That film I reviewed here (just skip the bit about the ballots and phrasal verbs); happily, Vancouver audiences will be able to see Klondike again at the Cinematheque (though only for one night, December 1st, so mark your calendars).

But friends who did get into the Playhouse that night assured me that Holy Spider was remarkable, a must-see, their pick of the fest, so happy news that it too is returning to the screen in Vancouver, opening at the VIFF Centre on December 9th. The film boasts a Cannes-best-actress-winning performance by Zar Amir Ebrahimi (below) as said journalist and an equally compelling performance by Mehdi Bajestani as Hanaei. It's quite brutal at times, quite painful, as Abbasi gives us enough time with three of Hanaei's victims that we come to care about them. This happens despite (or is it "because of?") Abbasi's depicting their rather desperate lives in a pull-no-punches fashion; the first is shown smoking opium and sucking cock before she encounters Hanaei, the darkness of her circumstances offset by our knowing she has a daughter at home whom she is trying to support. The second victim actually connects briefly with the female journalist; and the third, depicted in the poster, above, while the least obviously miserable of Hanaei's victims, is also the feistiest and strongest, the one you most hope will successfully fight back against him - which makes the brutal violence she encounters really quite hard to stomach.

The director's statement from the press kit - the full kit can be found on the Wild Bunch website - is excerpted below. There are a couple of minor grammar issues that I will leave as given:

HOLY SPIDER is a film about the rise and fall of one of Iran’s most infamous serial killers: Saeed Hanaei. In a larger context, the film is a critique of Iranian society, as the killer is a very religious man and a well-respected citizen. I was still living in Iran in the beginning of 2000s when Saeed Hanaei was killing street prostitutes in the holy city of Mashhad. He managed to kill 16 women before he was caught and put on trial. It was during his trial that the story really caught my attention. In a normal world there is no doubt that a man who had killed 16 people would be seen as guilty. But here it was different: a portion of the public and the conservative media began to celebrate Hanaei as a hero. They upheld the idea that Hanaei simply had to fulfill his religious duty to clean the streets of the city by killing these ‘dirty’ women. This was when the idea of making this film came to me.

My intention was not to make a serial killer movie. I wanted to make a movie about a serial killer society. It is about the deep-rooted misogyny within Iranian society, which is not specifically religious or political but cultural. Misogyny everywhere breeds through the habits of people. In Iran, we have a tradition of hatred towards women, and it often rears its ugly head. In Saeed Hanaei’s story this is present in its purest way. This makes it necessary to show different perspectives that demonstrate a range of opinions in Iranian society; those on his side and those who oppose him.

Saeed Hanaei is both a victim and a criminal. As a soldier at the front of the Iran-Iraq war, he has given his youth to his country, to make it better and to give meaning to his own life. He then finds out that society doesn’t care about him, that his sacrifices during the war didn’t change anything. He exists in an existential vacuum, in spite of his belief in God. Saeed goes to the mosque and cries in the house of God. He finds a new mission, a mission for Allah.

HOLY SPIDER is not intended to make political points against the Iranian government. It is not another critique of corrupt societies in the Middle East. The dehumanization of groups of people, especially women, is not unique to Iran but can be found, in different variations, in all corners of the world.

I see the movie as a specific story about specific characters, and not a “theme” movie about certain social problems. We don’t want to let Saeed’s story and persona saturate the film. Instead of making another movie about different ways a man can kill and mutilate women, we want to underline the complexity of the issue and the stakes on different sides, especially on behalf of the victims. Rahimi’s story is as important as Saeed’s. I want to get close to her and understand how she deals with conflicts within herself, with her family, and society while she follows the case.

Hanaei’s victims were not generic street women, they were individuals with their own personalities, and we hope to restore a part of their dignity and humanity that was taken from them. Not as saints, not as unfortunate victims, but as human beings, like all of us.

Abbasi says that part of the inspiration for the film came from the documentary And Along Came a Spider; it's available for free on Youtube, and contains interviews with Hanaei, I believe from shortly before his execution (there is also an interview with Abbasi in the press kit that I encourage you to check out, but it seems less than fair play to just excerpt the whole thing; you may also find this interview interesting, wherein Abbasi likens Hanaei to Travis Bickle!).

Of course, Iranian authorities have not responded well to the film. The Iranian Culture Ministry says the film "has insulted the beliefs of millions of Muslims and the huge Shiite population of the world," which insult you may need help to perceive, since the film, while condemning misogynist elements in Iranian society, is hardly irrelevant to the rest of the world or dealing with a problem specific to Iranian society. Hanaei's character is sadly very recognizable, a man who believed his life would be meaningful, who believed he was due a hero's stature, whose dissatisfactions in middle age (some of which may also doubtlessly have been sexual) find him embracing a sort of angry, violent authoritarianism, which ALWAYS takes its rage out on the vulnerable and weak (I mean, where's the fun in victimizing people who are stronger than you?). There's plenty 'nuff people like that - violent, women-hating bullies, whether they kill or not, who use their conservative values as a justification for predation - inhabiting every creed, Muslim, Christian, Jew, atheist or otherwise, living all over the world, even in Canada (though the structure of Iranian society might make them a bit easier to spot). It's kind of like Abbasi has, with this film, screamed into a crowd, "You misogynist bastards" and the Iranian Culture Ministry alone has looked up angrily and said "You talkin' to me?" (cf. the English idiom, "to take the bait.").

Abbasi - who ultimately had to film in Jordan, and whose film no doubt will not screen in Iran, addresses the question in the interview: Why is this movie threatening to Iran?

It’s not like we’ve made an explicit movie — but it’s one of the few movies set in Iran that conveys a certain realism. There has been severe censorship in Iranian cinema for the past 50 years. Any movie you see is presenting a parallel reality of Iran, like movies from the Soviet era. Almost all of them adhere to a set of written and unwritten rules, even movies critical of the Iranian government. The taboos that are never broken in Iranian films include nudity, sex, drug use and prostitution. But those things remain a big part of Iranian society and they are relevant to my story, even part of its atmosphere.

...I don’t want people to see this as a message movie, although misogyny and dehumanization are themes we explore. My intention was to hold up a mirror to Iranian society, and while the mirror might be dirty or broken, it shows a good portion of what it feels like to live there. This movie is as much a political statement as a comprehensive view of society and while I don’t think Iranian society is a sick place, I do believe the representation of reality in Iran has become sick in terms of how women’s bodies are depicted on-screen. They have been dehumanized into non-existent figures with faces buried in cloth. Almost every family has access to unregulated cable TV that routinely shows Britney Spears dancing in a bikini, but Iranian women are seldom depicted as having a sexual life. Also, after thinking about this story for more than 10 years, I feel a fundamental injustice because the families of Saeed Hanaei’s victims are seldom mentioned. A tragic injustice befell the women who were killed — they became numbers and people stopped caring about them, much less their families. These were real people, and by showing their fate in a specific way, their survivors can remember them as human beings like anyone else.

Like I say, the film is quite brutal at times, so be warned if you go, you will flinch at some scenes (I did). It's also gorgeously cinematic - Abbasi talks about wanting to create a "Persian noir," and it succeeds there, as well. But it's well worth going to see - a remarkable film to emerge from Iran. Too bad that what might be the greatest piece of Iranian cinema of our time has been rejected by the country that birthed it, and that Iranian audiences will never get to see it (unless it is pirated, which I imagine it will be, quite widely).

Hey, does anyone know if those protests at the VAG are still going on?

For more information on the VIFF Centre's screenings of Holy Spider, go here.

Posted by Allan MacInnis at 9:25 AM