In which I dream of Peter Stampfel

There are few living American musicians whose body of work I revere more than Peter Stampfel, of the Fugs, Holy Modal Rounders, Bottlecaps, and lately a host of bands, from the Velocity Rounders to the Atomic Meta-Pagans to the Worm All-Stars to the Deposit Returners to the Ether Frolic Mob (most of which are sorta technically backing bands, as in Peter Stampfel and..., and some of which feature his daughter Zoe). If I had free tickets to see Bob Dylan, but could pay $100 to see Peter Stampfel across the street the same night, I would pay the $100 to see Peter Stampfel - that's how much I revere him (though in a somewhat irreverent, casual way, but damn does his music bring me joy, you know?). I think I would also (shh) choose Stampfel over Eugene Chadbourne, though part of that is because I have never seen Stampfel and have seen Eugene a dozen or more times. Though I suspect I will in fact never see him perform live, I had the great privilege of interviewing him at some length and have occasionally interacted with him since, and am in the process of catching up on his discography, since it turns out he's been rather crazily productive since that interview, putting out a dozen or more albums since the last one I bought off him (Dook of the Beatniks, from 2009), and collaborating with everyone from Jeffrey Lewis (naturally) to Shelley Hirsch (!!!). You can read about some of these albums on Robert Christgau's site, where it becomes quickly evident that Christgau is a fan of the Rounders and Stampfel too; or you can order the most recent of Stampfel's solo records via Don Giovanni Records, like this one: 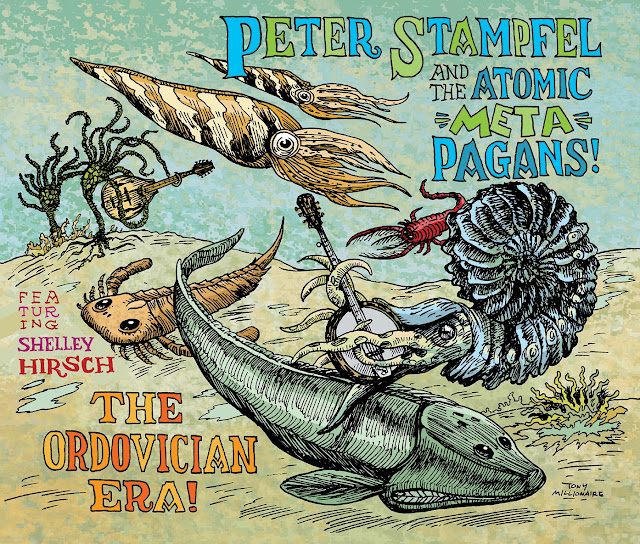 Anyhoo, I dreamed of Peter Stampfel last night. I was (in the dream) at a house party in Seattle where Peter was performing. It was very casual - a large living room with a small, relaxed crowd of people. To everyone's surprise, Peter rode in on a horse - a white one - wearing cavalry gear and maybe brandishing a sword, while performing Johnny Cash's "Big River" (which is actually in Peter's repertoire, though the horse-uniform-and-sword stuff is not). This part I mostly emailed to Peter on waking, since I thought it might amuse him; but I didn't tell him the whole dream - that I spent most of the concert distracted by my cell phone, really, really wanting to make a Youtube video of his set but not being able to find the "video" function, because my phone had been updated and everything was messed up; or that after the concert, I bought some records from him, but as I was walking away down the alley behind the building - explaining to a homeless person about Going Nowhere Fast - I realized that I had forgotten to ask Peter to sign my records. That was imperative, so I ran back to the building, got inside, but - before finding Peter, decided I really needed to pee. I went to an elaborately decorated, expansive, kinda like Elizabethan-or-something bathroom and began peeing in the first receptacle that I could, which, alas, turned out to be a small, half-filled, decorative antique bathtub. Why there was water in the bathtub I could not say, but as I stood with a vaulting arch of urine splashing into it, I realized I was probably going to have to find a way to drain the water out of the tub, so no one, like, bathed in my pee. This, alas, would be contemplated by the lack of a drain in the tub - I was going to have to pour it out manually, somehow, and this was going to delay my quest to get my albums signed.

Then I woke up, needing to urinate. I hope Peter Stampfel is still writing his memoirs and that he's included a hilarious anecdote about an enormous booger he had hanging out of his nose at one point, which he posted on Facebook, asking us to support him against his wife's opinion that the story was in bad taste. It was funny! Then again, I just posted about a pee dream.

You can stream the whole, crazed cornucopia of The Ordovician Era here.
Posted by Allan MacInnis at 10:19 AM