No Dead Boys for me! (But you should go!) 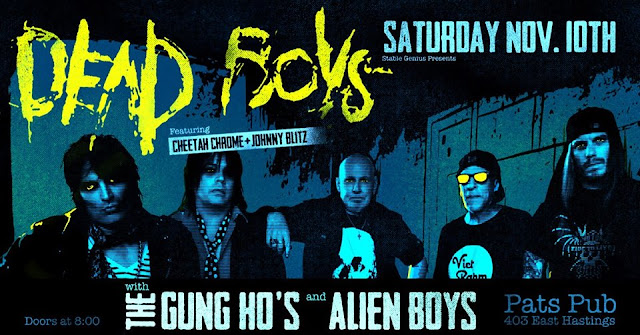 Just a little announcement: I will not be at the Dead Boys, November 10th at Pat's Pub. I have Other Plans That I Will Not Change on that weekend, I have just recalled. I take consolation in knowing that two smaller punks can probably fit in Pat's in the space I would have taken up; plus those of you who would rather not run into me at gigs can take heart and buy tickets accordingly. I congratulate the event organizer (whose initials are also DB!) for pulling this off - getting a last minute gig booked for the band when he saw they were coming as close as Bellingham. I applaud, too, his choice of opening acts: I don't know the Gung-Hos (though holy shit, I kinda want to; they seem pretty musically appropriate for this show) but having the Alien Boys on a bill with the Dead Boys is an inspired gesture. By the by, I only just figured out that the Alien Boys are PROBABLY NAMED FOR A SONG BY THE WIPERS! - speaking of American punk prototype bands out there. I dunno if I will be able to do more press for this but we'll see. Now go buy your tickets while you still can. 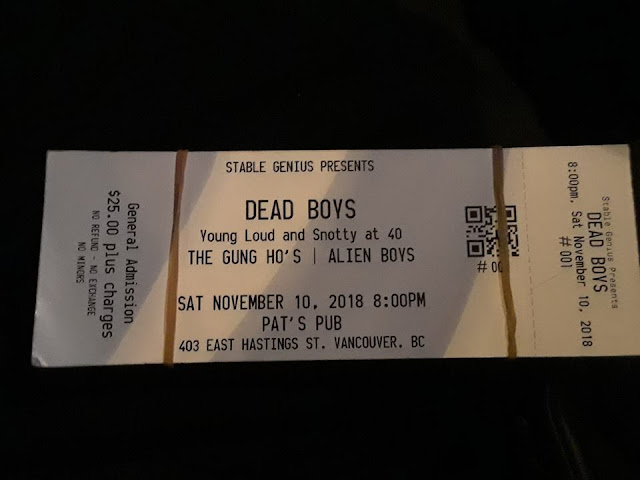 Posted by Allan MacInnis at 9:40 AM

Stiv, Jeff, and Jimmy won't be there either.

There is something to that, but the thing is - without meaning to disrespect the late, great Stiv Bators - Rocket From the Tombs wrote most of these songs anyhow! So as great as they are, the Dead Boys are basically the most famous Rocket From the Tombs cover band in punk rock history. And since Cheetah Chrome was also in RFTT, and is still in the Dead Boys, it's still kinda the same thing seeing him playing these songs, regardless of how many original members are left with him (only the drummer, is my understanding). I would go, if I could.