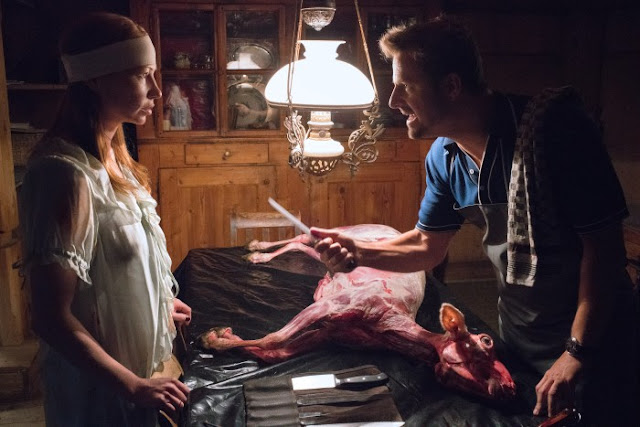 I was not in the mood for Animals when I tried to watch it, but based on a half an hour or so of viewing, I can attest that it's very well-made: smart, tight, and darkly playful, and if I were writing a full review, I would maybe try to incorporate references to Weekend, Long Weekend, and Lost Highway. Maybe I would title the review Long Lost Highway Weekend? For a film at least somewhat preoccupied with suicide, it's disturbing to learn that one of the makers killed himself; but if you like a slightly cruel surrealism, or cinema that fucks with your head while remaining more or less coherent, it is well worth a look; please don't let my not having finished it deter you. There's a fair bit in the film about infidelity, as well - and a very unsympathetic main male character, at least in the segment I saw.

Bitch - which it happens, I did finish - was less exciting to me, seemed less of an accomplishment, though I am sure some people at the Rio last night found it fun. Someone else's smartass quote in the VIFF catalogue is perfect, likening it to "if A Woman Under the Influence and Mr. Mom had a baby," though it doesn't capture the slightly werewolf-y aspect of the film. But I found some of the incompetence and self-absorption of the main male character kind of misandrist, to be honest - it's a very broad portrait of a man, though Jason Ritter handles it gamely. I further found the children (who include the Walking Dead "zombies are people too" girl) not particularly believable and rather annoying; and didn't really enter the mind of the female character - director Marianna Palka - who turns into a growling dog and has to be locked in the cellar. (Ginger Snaps mines the whole female-transformation-into-an-animal thing much more thoroughly). Bitch begins as broad comedy, ends as touching drama, and veers through suburban surrealism and a slight bit of horror, but the whole seems somewhat less than the sum of its parts. The VIFF progtram mentions "Morgan z Whirledge's chaotic score;" I must say I found it quite grating at times.