The Witch Who Came From the Sea, The Premonition: partial review of American Horror Project Vol. 1

Just before my cancer diagnosis, as a last minute extravagance, I broke down and bought the Arrow Horror Project Volume 1 from HMV at a 20% discount. I figured I'd never have a chance to buy it for $60 again, and I was dying to see what the Stephen Thrower introductions looked like. Plus there were a couple of the films I had long been curious about - especially The Witch Who Came From the Sea, which I used to see on VHS in "the old days," and thought had a compelling image on the box (riffing on Frazetta, by way of Vampirella). 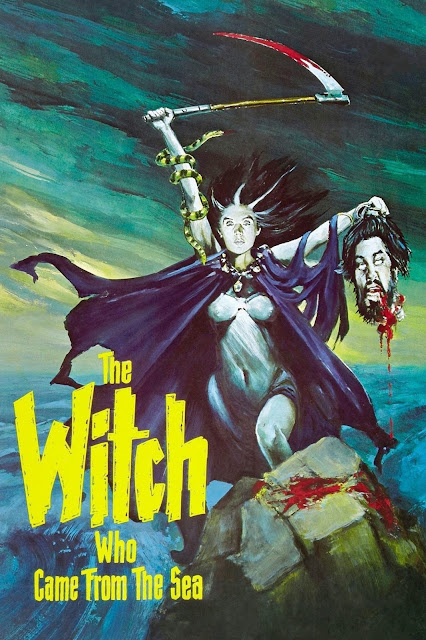 Turns out, as much as I admire Thrower's Nightmare USA - one of my favourite ever film books and a labour of love from FAB Press, the same people who publish Robin Bougie's books - he looks very little like the man on the jacket, and is a lot less dynamic as a speaker than he is as a writer, seeming rather conservative and polite,  more like a 50 year old film scholar than a former member of Coil. It is kind of like meeting the soft spoken, articulate film scholar Chris Desjardins and trying to reconcile his presentation with the whooping, snarling, yelping vocalist of the Flesh Eaters. I like what Thrower has to say but it's not quite the same as reading his book, where his wit and intelligence really shine. Kier-la Janisse is involved in the project, too, though I haven't really explored her contributions yet. So far I've seen two out of three of the films in the set: The Premonition and The Witch Who Came from the Sea. 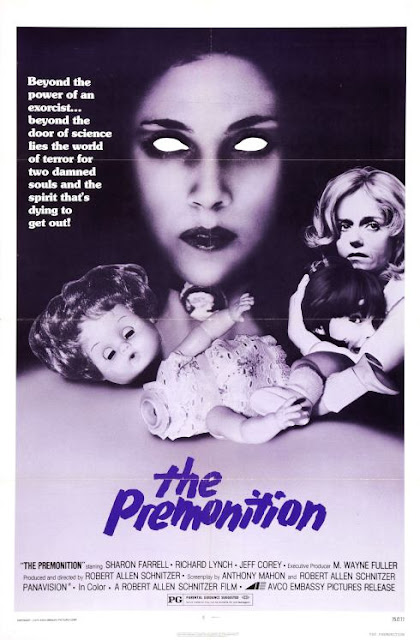 The Premonition was interesting, but slightly disappointing. It's an odd, odd story: a woman with a past of mental illness and institutionalization is seeking out her daughter, now adopted by a "normal" middle class couple. She has the help of a rather perverse, violent circus mime/ clown/ photographer, played by creepy Richard Lynch (the con who sexually assaults Al Pacino in Scarecrow; he's unsettling enough without the mime makeup, y'know?). His investment in the planned kidnapping is unclear, but when it goes wrong, he loses his temper and murders the daughter's birth mother, who has bungled the job, then goes ahead and kidnaps the girl himself! Not sure why: the major weakness of the film for me is that such actions aren't really given a persuasive rhyme or reason. It's one of those films where "because he is nuts"is all you're supposed to need to understand someone's motivation (it's only marginally better than, "because he's played by Richard Lynch!"). 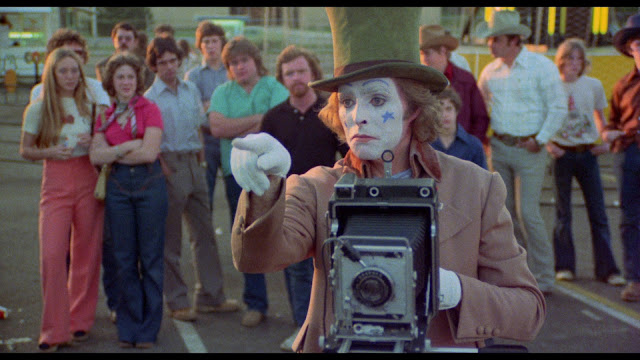 The remainder of the film has the adoptive parents - led by the mother (Sharon Farrell of It's Alive and Dennis Hopper's locally-shot Out of the Blue) - trying to figure out where their daughter is. She is given to visions, and her husband is involved in paranormal research, such that the climax of the film plunges us deep into weirdness. To be honest, though I greatly enjoyed the character of the parapsychologist - the partner of the husband, played by Chitra Neogy, in a rare substatial role for a woman of colour in a 1970's genre film - I have no particular passion for vindicating paranormal studies, which seems to be a driving ambition of the film and filmmaker, so I was left on the thematic front just a little cold. And besides having some strange, unresolved questions about character motivation, the film also sprawls a little too much, doesn't seem to know what bits can be streamlined, leaves too many questions unanswered. Interesting, unique, ambitious, and a B+ piece of 1970's genre cinema at best.

The other film of the set that I have seen, The Witch Who Came from the Sea, is brilliant. It is in a way much more ambiguous, but very much by design, not because the filmmakers haven't quite mastered the art of parsimonious storytelling and creating believable characters, but because they're operating on some higher level of artistry. The Witch Who Came from the Sea is one of those films that defies easy description, because you're not sure what, of its events, are things that actually happen or are things that are in the mind of its (also mentally disturbed) main character, a woman named Molly (Millie Perkins) who:

a) Was sexually abused by her father, who died of a heart attack during one transaction. collapsing naked on top of her on the bed
b) Has created a delusional system involving him being a sailor lost at sea, to compensate for the trauma of his death
c) Is given to sadomasochistic sexual fantasies, which are very much seen through her eyes (this is a female-gaze-intensive film, with bulging male crotches and more)
d) May be responsible for some vividly depicted murders of men involving seduction and castration (castration aficionados need to seek out this film)
e)  Is living, nonetheless, a normal life, helping her sister raise her two boys, sleeping with the owner of the bar where she works, etc.

The film goes from seeming to suggest she couldn't possibly be responsible for these murders - that she's delusional through and through - to suggesting that she might indeed be, but it doesn't ever really offer a pat resolution: the point of the ending, as I read it, is that whatever the truth may be, she is hopelessly lost, permanently destroyed by her childhood experiences, beyond help or consolation. It chooses to end on poetry, not logic, and that's fine with me - though I imagine some people would be intolerant of the level of ambiguity on display. Fascinating film, though! Hard to believe it was considered a video nasty, considering the tameness of the gore; the castrations are more suggested than depicted, though the build up to them is so skillful that they have substantial impact no less.

One note on the source of materials, however: I haven't quite wrapped my head around Arrow's rep. I know they offer some very choice titles, and that their extras - which I've only barely peeked at - are supposedly top-notch and generous, justifying the prices they ask. I was very impressed by the one previous region 1 Arrow I watched, Pit Stop. I understand that when dealing with obscure, culty titles sometimes you have to take what you can get - that surviving elements are not always in perfect shape - and I don't mind the odd scratch or bit of dirt on-screen, to remind me that I'm watching a film. All that said, I was a little surprised by seeing damage to the print of The Witch Who Came from the Sea that seemed the sort of thing that might be repairable by digital restoration; given the price of the set - it seems to begin around $90 new, at the lowest - you'd think that...

Well, nevermind. It didn't really bother me, and I have no doubt they did the best they could, I was just a bit surprised by the amount of scratches onscreen at times!

Looking forward to Malatesta's Carnival of Blood, which I'll get to later this week, perhaps. I'll post a review in the comments if and when I do. 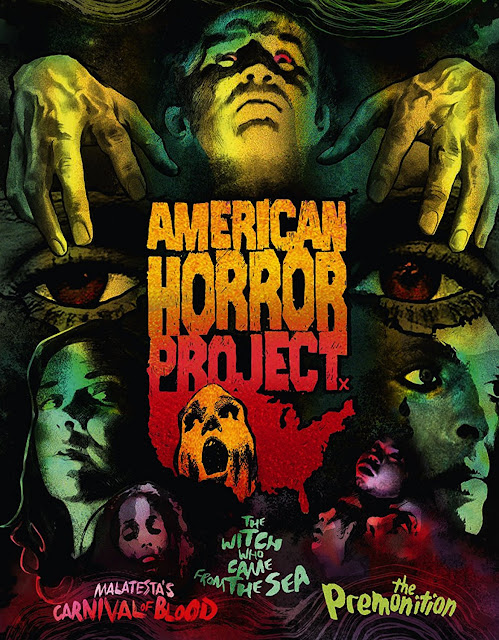