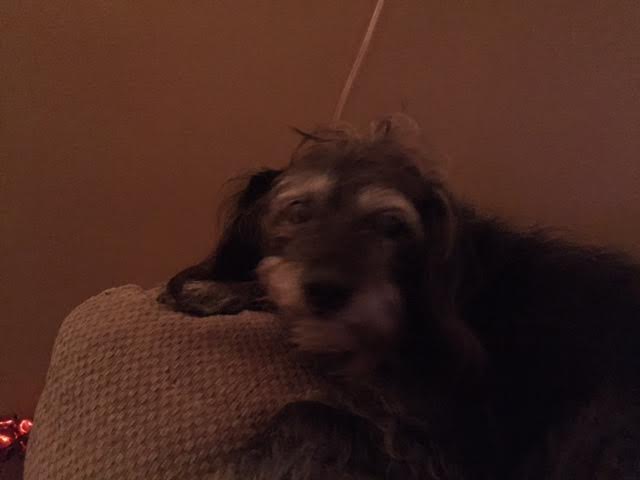 (photo of Ozzy by Erika Lax)

David M's dog Ozzy has been sick, so today, when I got an email from David with just the word "Ozzy" in the title, I knew what it would say.

Ozzy was a very, very sweet guy. He would run up to you barking and happy when you visited, run laps around David's living room while you sat on the couch, leap up beside you, walk along the back of the couch, roll around in front of you; he was always letting you know, by a myriad of ways, how happy he was you were visiting. Because David's door buzzer doesn't work, if you visited, you had to phone David to be let in, so even if you were just phoning, Ozzy wouldn't know the difference - he would think company had come over and start his rather joyful anticipatory bark, which you could hear in the background. When you actually did visit, Ozzy would generally beat David to the door and be there, wagging his tail, ready to say hello.  I don't think I've met a more exuberant, joyful dog (though I saw similar behaviours in Teddy, the therapy dog who licked my Mom's face when she was in hospital, who had an Ozzylike manner; Ozzy also was a therapy dog, David told me, so  maybe it's a therapy dog thing to be exuberant and joyful?). There was a lot to learn from Ozzy - he was a very healing, wise, happy presence who did not keep any secrets about how happy he was to be alive, most days, though the last few weeks have been tough. I mean, look in his eyes (it's a photo from some months ago): that's a wise little dog.

Be nice to David this week, folks, this is tough stuff. (Les Wiseman posted "The House Dog's Grave" on David's Facebook page but yikes, I can't make it through that  poem without sobbing on a normal day). So sorry, David. We're all going to really miss him, and we all know you loved him.

It was a privilege to have known you, Ozzy.
Posted by Allan MacInnis at 5:58 PM

And Allan. Story by Allan, photo by Erika. Got it. You know, Ozzy wouldn't cross the road to see just anybody (just like his daddy).

No sweat, i see how my photo caption misled you! Ken, Tim and all say hi.