Dave Alvin and Phil Alvin and the Guilty Ones (with Cousin Harley): a Full Meal Musical Deal, July 14, 2016

Wow, last night was amazing. Paul Pigat's band Cousin Harley tore it up, and there was one of those weird moments of musical serendipity where I kept thinking how cool it would be if they did Johnny Horton's "I'm Coming Home," right up until the point where they actually did it. I take no credit (it's not like I was calling out for it, plus it's on their new album, The Dutch Sessions, too, and is apparently a staple of their live set, though I knew none of that). It was a treat no less, since it's one of my favourite Johnny Horton songs, trumping his cheesier historically-themed hits by far (now that I'm allegedly a grownup I like Johnny Horton a lot better when he's singing about honky tonks and women than going to Alaska, fighting in New Orleans, or sinking the Bismark). Pigat also covered a Ray Condo tune, inviting the audience to cheer Condo's name, and getting far too small a reply, the insufficiency of which he remarked upon (Note, Paul: I was the guy cheering late, because, sorry, I was kissing my girlfriend when you asked us how many of us knew Condo's music, and missed the cue; you're right, more people should have applauded). I can see why the Reverend Horton Heat loves this guy, and why Petunia got him on board for a recent album. I could also see that it would take a very, very confident band to invite anyone THIS good to open for them. 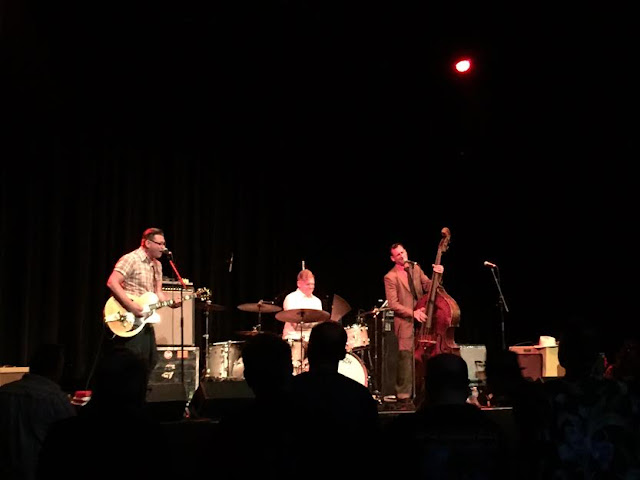 Sad that the venue was half-empty for Cousin Harley's set! A lot of people seemed not to realize it was a bit of an early show (all was finished around 11:20, which is a very reasonable time indeed for working people). Then again, the one guy who I know didn't mean to come late was also talking about how he almost pissed in the Imperial men's room sink, mistaking it for a Glasgow-pub-styled tile piss-wall. He's got a point, actually, but if you have to catch yourself from pissing in the sink, it's no surprise you're going to come late for a show... anyhow, Cousin Harley's Keith Picot looked like a rockabilly bassist might if there were a rockabilly bassist in a David Lynch movie, was alternately ebullient and menacing as he slapped his bass with fingers as long and dextrous as Greg Cohen's. Jesse Cahill, the drummer, had a cute rockabilly haircut and sleeves full of tattoos. I feel like I've seen his name on albums by other bands I've heard but I don't know which, and I don't have a thing to say about his playing, since I wasn't exactly takin' notes; you can't be in a trio like this and NOT be great, though, so he was, obviously, great. And it turns out Pigat - the least flashy in appearance, looking like a 1950's science nerd in a short sleeved shirt and glasses - had hot lick after hot lick for us, plus he sings (which came as a surprise to me at least since the one album I've heard by Cousin Harley was instrumental). I'd see these guys again any day, and I think so would Erika. 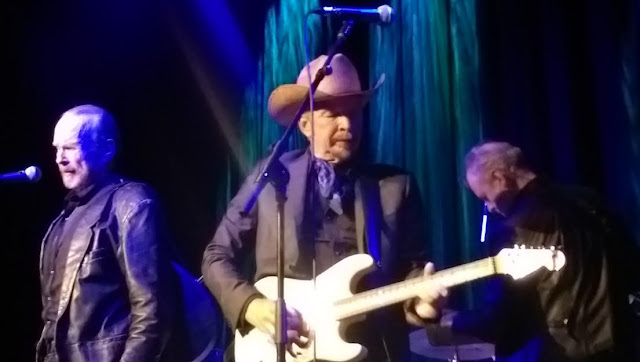 Phil Alvin, Dave Alvin, and a Guilty One by Allan MacInnis

Dave Alvin and the Guilty Ones, meanwhile, won us all over before brother Phil even took the stage. Dave's solo during "Abilene" was one of the most moving I've heard in years - I might want to hunt down Blackjack David, the 1998 album it appears on, because it's one great piece of storytelling/ songwriting. So was "Harlan County Line," another song that came early in the set. Kickass band, including a drummer from Alvin's Guilty Women days,  Lisa Pankratz, who wore a green dress, cowboy boots and fishnets. There's an article profiling her online here, tho' I haven't read it yet... Don't recall a female drummer ('cept Stepha) who played with such passion and power. Actually, other than Stepha and Pankratz, I don't think I can recall a female drummer. (Oh, there's Yoshimi, but I barely remember her playing, been a long time since I've seen her with the Boredoms and the one time I caught OOiOO, I thought they were kinda disappointing live, actually, serving to prove mostly that most of their magic happens in studio). 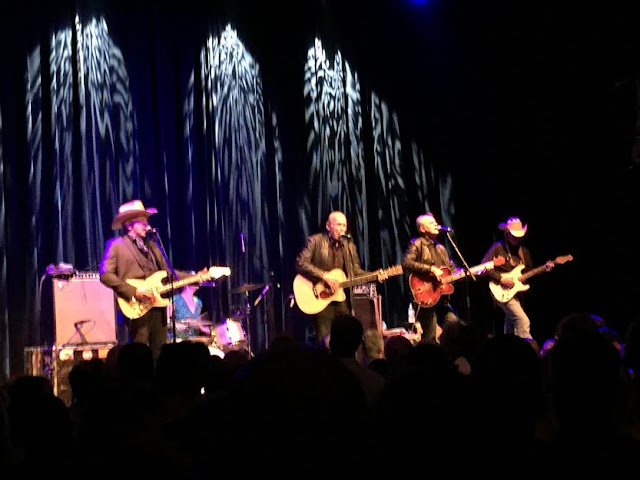 Dave Alvin and the Guilty Ones with Phil Alvin, by Erika Lax

Anyhow, all of the Guilty Ones cooked - and it was nice that bassist Brad Fordham got a couple solos, and Chris Miller held his own against Dave Alvin, doing a few solos himself during the night, and taking on slide duties (he seemed a bit loud in the mix, at times, but I was standing right in front of his amp, so it might have been down to that). The treat was, of course, hearing Dave and Phil together, once Phil took the stage, about four songs in. The majority of the set consisted of Big Joe Turner and Big Bill Broonzy covers, with a few Dave Alvin originals, like his song about the death of Johnny Ace, which I'd only read about from Nick Tosches. Naively trusting, I had taken Tosches as gospel - that at the very least Ace's death was a suicide, or perhaps a possible murder, which Tosches hints at the end of Ace's chapter in the Unsung Heroes book that he can't print the truth of lest he get sued - so I assumed while he was singing it that Alvin's song, involving dark doings backstage with Big Mama Thornton and her band, was a fictional elaboration on what happened. Afterwards, reading more on it - about Ace's fondness for Russian roulette, and the presence of witnesses who saw him point the gun at his head - it makes it seem that the "elaborator" was Tosches, and that the most likely verdict was that Ace's death was a tragic accident. I guess given a choice between musicians and journalists one should trust the musicians... 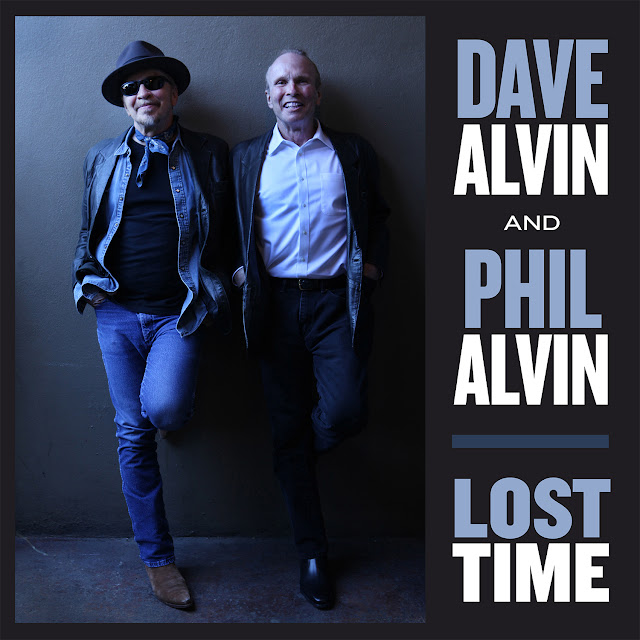 There were plenty of other anecdotes in between songs, too, about the young Alvins sneaking into shows as teenagers and their love for the songs they were singing. Dave - grinning and swigging from a bottle of beer - was actually a pretty chatty guy, dedicating Oscar Brown Jrs "Mister Kicks" - the opening track on the new Alvin brothers album, Lost Time - to the guys in the alley behind the venue, and dedicating "American Music," the pre-encore closer, to a list of American musicians who died in 2016, including Lonnie Mack, Guy Clark, Prince, and, most pointedly, Merle Haggard, whose "Mama Tried" the band rendered briefly near the end of that tune. He also told the story of Phil's death-and-revival by way of an entertaining introduction to the Blasters "Marie Marie"  (other Blasters tunes included "Border Radio" and an instrumental riff on "So Long Baby Goodbye" at the very end, with Phil using harmonica instead of his voice). The two Alvins had a great deal of fun passing compliments and other adjectives describing the other back and forth during a song about people's interest in their relationship, "What's Up With Your Brother," which seems to have been written by Dave before he and Phil got back together. Dave namechecked a bunch of colourful brothers in musical history at the start of the song, but the song got me thinkin' mostly about Ray and Dave Davies, who remain unreconciled, as far as I know... 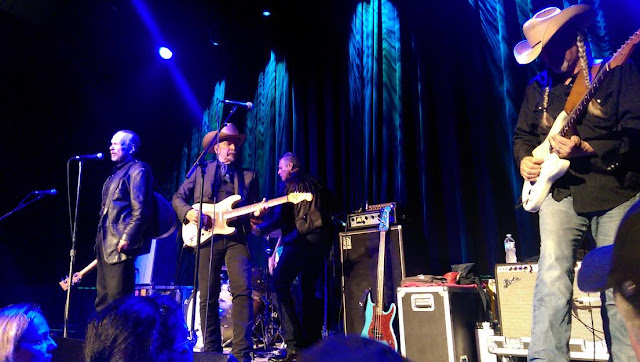 I never much thought I'd get to see the Alvin brothers together in any form, y'know? I missed a couple of Blasters shows because I didn't really want to see the Blasters without Dave. I missed a couple of Dave Alvin shows because I didn't really want to see Dave without Phil. I don't really know what kept them apart for so long, but it was kind of a dream come true to be dancing to both of them performing "Marie Marie." It was a wholly satisfying night, a full meal musical deal if there ever was one, and I'd go again to see the Alvins if I ever am lucky enough to get the chance. See if you can spot me in the pic below; I think this is from about when Dave was pointing out people in the audience, identifying them by single nouns; maybe he spotted my Flesheaters t-shirt from afar, from the recent show he did with them in Seattle, but he picked me to illustrate the word "hustlers." Clearly he knows me well. 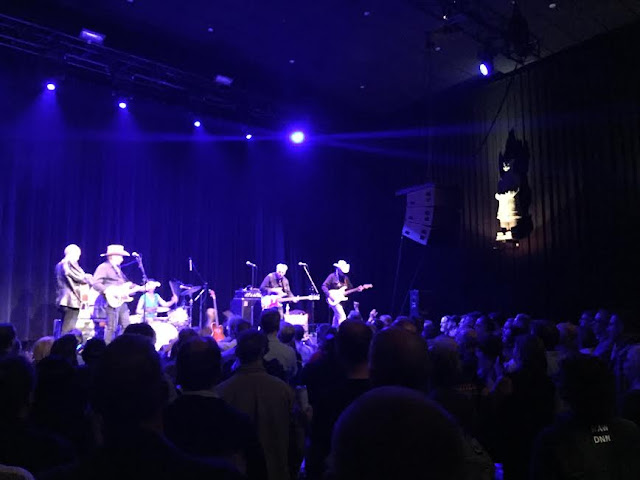 If there was anything that posed a cause for concern during the evening, it was this: to be absolutely honest, it wasn't entirely clear how much Phil was enjoying himself up there; he's a bit stoic, a bit of a hard guy to read, and doesn't move around all that much (which might have something to do with his health issues, I don't know). He got a few laughs describing Dave as "vociferous" and "well-hatted" during "What's Up With Your Brother," and he cracked the odd grin, but didn't have a lot else to say between songs, stood pretty stiffly in fact, and sometimes his face seemed a bit strained. Maybe he was just listening hard, though? But Dave was far more visibly having a good time, cracking big grins and showin' off a bit. Still, a delight to see these two together again, and Phil did do an acoustic guitar solo of his own at one point (during a segue into "Fly Me to the Moon," of all things). Also, Phil impressively kept his long leather coat on throughout the night, in a venue that was pretty damned hot by the end of things; I wonder if Lisa has to pour sweat out of her boots at the end? 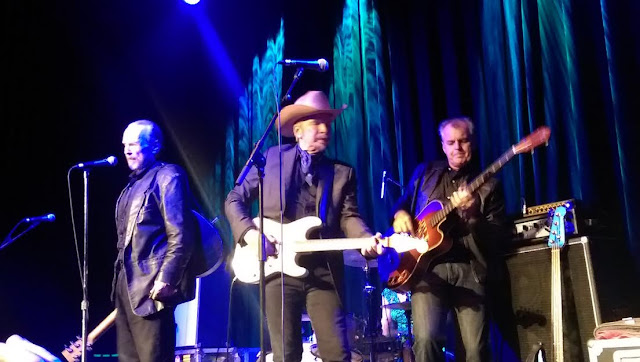 I shot no video, sorry. I saw that other folks did but none of it's uploaded as yet. You really just should just have been there! (There weren't many people I recognized, though I think that was the Nervous Fellas Shaun Butch Murphy talking with Jon Card near the end of the night, and the Furies Taylor Little and Zulu's Grant McDonagh were both on hand). Great, great night. One more show scratched off the bucket list! Hope Dave and Phil keep working together for a long time to come...
Posted by Allan MacInnis at 10:12 AM