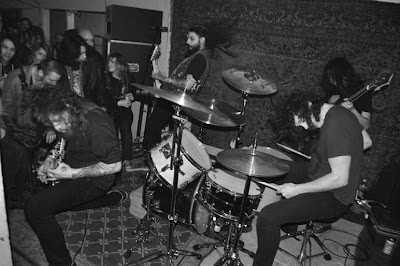 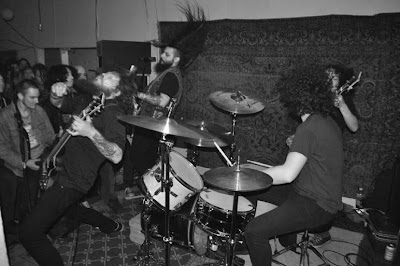 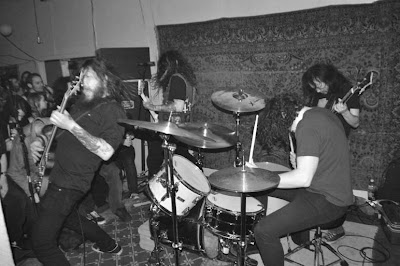 Bison BC by Femke van Delft. Since Bison BC have a new drummer, I figure there's not much harm in posting some more of these photos, from the last gig with Brad Mackinnon at the Red Gate, before that venue was killed by the city (help Raise the Red Gate here). Photos are not to be reused without permission! (I routinely say this, by the way, because apparently no less an entity than the Vancouver Sun lifted a photo off my blog, without so much as a hi-howareya, a few years back. This doesn't show disrespect for ME so much as it shows disrespect for the photographers I work with, whose work should NOT be presumed to be public domain, especially if someone can afford to pay for it).

My conversations with James Farwell and Dan And of Bison covered a lot of ground, and not all of it could appear in the Straight article. We talked about new drummer Matt Wood, for instance, who has taken over from Brad, the guy pictured above; I glad I spent some time on him during my 2011 Rickshaw birthday party review, because I couldn't really fit him into this piece. It wasn't for lack of quotes. James was really enthusiastic in characterizing Matt's contribution to Lovelessness: “The space that’s on the new album, man - he creates this space for these riffs and for the song structures: he knows when not to fuckin’ play drums! It’s insane. I think he brings a lot to the band.”


Dan And and I also talked about Matt. "He’s a completely different drummer than Brad was," Dan said. "They think about music in totally different ways. And that was the one thing about him joining the band, we told him, ‘you’re not the new guy, you’re not the fill-in drummer, you’re a part of the band,’ so all of the decisions we had to make, arrangement-wise, he was 100% involved in. Anytime you bring a new member into a band, it can be really difficult, but because we’ve known him for so long, there wasn’t a big adjustment period at all. He dove in with all he’s got.”
I mentioned to Dan that one of the things I really love about Matt's drumming has nothing to do with the drumming per se, but how HAPPY Wood looks to be doing it. Dan knew immediately what I meant: “Anytime I think I’m havin’ a bad show, all I have to do is just look at Matt, and everything I’m worried about is just gone instantly.”
There's a terrific photo that Femke took at Fortune Sound Club awhile back that illustrates that quote brilliantly, but I'm going to restrain myself from posting it here - it has more important places to be in the future. Meantime, since he's not really focused on so much in the Straight piece, here's a cool photo of Dan, doing his thing as lead vocalist for the Bison BC grindcore project, Cooked and Eaten, who also played that Red Gate gig. 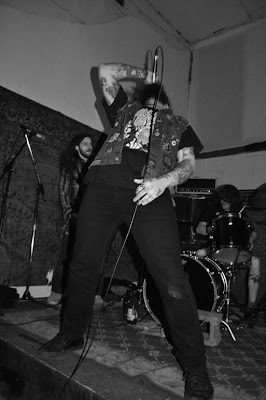 Not to shortchange him, Brad Mackinnon's decision to leave the band was also still clearly being felt by the guys in Bison. Talking about the various stresses the band feels - from the energy consumed by constant touring to the pressures placed on them from without, Farwell said, “I don’t need to lose another band member because they’re burnt out, bummed out, and angry in the wrong way! I want to go on the road, but I want it to be good - I want it to be sustainable, man. I want to make these records for awhile longer, and I mean, you know - we lost Brad!"

Farwell says that it would be great at some point Bison can be all the focuses on - that he won't have to continue his dayjob - but he's very realistic about the prospect of that. "We’ve been doing this band since 2006. What does a band that plays incredibly unpopular music have to do? Dan’s getting married, I’m turning 40… I mean, how long do we have to stay on the road? Do we have to go on the road for eight months a year, and completely devastate our lives in our city?" 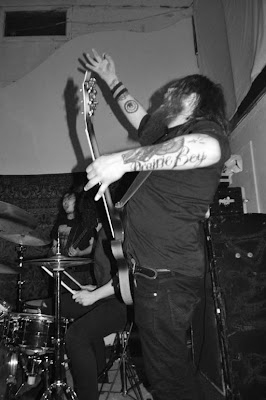 James Farwell by Femke van Delft, not to be reused without permission

Dan said similar things - that making Bison sustainable is a priority right now. It's an understandable concern, because he had to miss a few shows last year.  “The last tour we did was about two and a half months, and when we circled America and came back to Vancouver for a show, we left Vancouver without Dan,” James told me. “And that was the hardest thing that the band has ever had to do. Dan, for his reasons, had to stay home for a couple of weeks, and we made the decision that we would go out as a three piece,” not knowing exactly when Dan would rejoin. “And this was Matt’s first tour with us! And we went out, and we did two weeks with Weedeater, in front of big crowds - and crowds that knew the band, knew the songs - as a three piece. And we fucking overcame, we slayed everybody, and Dan came out and met us two weeks later,” and was on hand by the time the band left for Chicago. “But this is how we are - we overcome and we get it done.”
I for one am very, very happy with the new album - very glad that the band continues to overcome and get it done. I think Dan is a killer songwriter, mind you, and am looking forward to what he does in the future, but in the meantime, Lovelessness is a remarkably cohesive album, showing the band continuing to grow and grow more powerful - so I have no problem waiting. If you haven't seen Bison live yet, you're missing out on one of Vancouver's best bands; Saturday's show would be a great night to come check them out. For more terrific Femke van Delft photographs of Bison, and a sort of compilation of a few past interviews I did with the band, see here. See you at the Rickshaw! 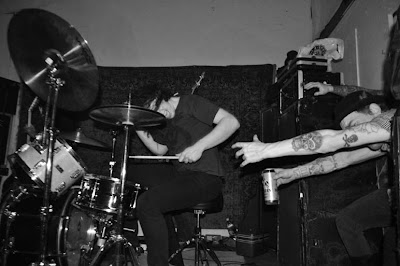 Brad Mackinnon by Femke van Delft, not to be reused without permission.

Posted by Allan MacInnis at 1:45 AM