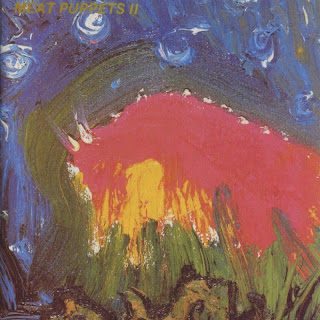 Wow! Just stumbled upon a vinyl reissue of Meat Puppets II at HMV today. I'm fonder of the craftier Up On The Sun - and it kind of galls me, truth be known, that this Pups' album is only as famous as it is because of the endorsement of Kurt Cobain, and Nirvana's covers of "Plateau" and "Lake Of Fire," both of which are on this album in their original incarnations. It would be a completely neglected American masterpiece if it weren't for Kurt - a poor overrated sap if there ever was one, who somehow got buried under all the praise that hundreds of more important musicians (like these guys, say) had been denied while the mainstream was ignoring anything that smacked of punk. I can't help suspecting that a goodly portion of the people who now acknowledge this disc's greatness would shrug and say it "sounds too weird" or something, if they didn't feel obliged to like it for Kurt's sake... all of which, in a way, might have been better for the Pups, who themselves had some very difficult years after the brush with semi-fame that Kurt brought'em... but anyhow, I'll take what I can get; if this isn't my fave Pups album, it sure by damn is my second fave, and it's probably "objectively more important" or something like that (and not just because Cobain liked it; he is not the yardstick, repeat, he is not the yardstick). And it has the original "Lost," which the Minutemen covered, many bizarre bits of acid-soaked poetry, and some truly amazing instrumentals, which do very very strange things to your mind if you let them. The new vinyl version sounds great, is nice and heavy with a gatefold cover with lyrics and liner notes; and a not-bad price! (Was $18.99 at HMV, which probably means it's a couple bucks cheaper elsewhere if you shop around...).

I wonder if Cris' troubled history would make it hard for this band to get into Canada? I've hoped for a 'Pups show here for some time... Hm.
Posted by Allan MacInnis at 11:27 PM