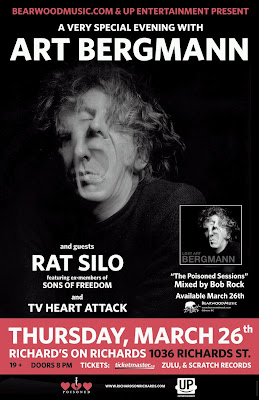 I suppose if you haven't gotten your ticket when the Art Bergmann show finally sells out, you can all make your way to see Rich Hope and his Blue Rich Rangers at the Railway on Thursday and cry in your beers with the band about missin' the historic gig (maybe they could do a country version of "The Hospital Song" or such as a consolation; I could hear Rich doin' that...). As of now, tho', I believe, there are still a few tickets for Art's gig on Thursday available via Ticketmaster and such. Art has a very brief interview with Black Lips guy Billy Hopeless in The Skinny (not online as I write, but look here tomorrow and maybe it'll be there, who knows?). I've waited a long time to see Mr. Bergmann perform - tho' I've met him on a couple of occasions, I've never actually seen him live, which I hear is the way to experience him, so I'm stoked about the show. 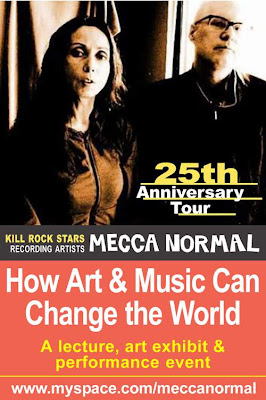 Mecca Normal, meanwhile - an underappreciated but long-lived, quirky, whip-smart female-fronted duo, consisting of Jean Smith and David Lester, will have a show themed around "How Art and Music Can Change the World" at The Vinegar Factory (1009 E. Cordova St) on the 28th (Saturday), kicking off their 25th anniversary tour. The band's at times wince-inducingly truthful (but very funny and listenable) The Observer, about the horrors of online dating, is a must-spin if you like large doses of intelligence with your rock; I was very pleasantly surprised by how much fun I had seeing them live a couple of months ago, and am lookin' forward to the gig (more on which a tad later). Opening, too, will be a project featuring another one of my fave local musicians, Dave Chokroun, doin' something with Robots on Fire's Jonathon Wilcke. I kinda forget what they're callin' themselves but I sort of expect it to be basically The Sorrow and The Pity with a different sax player.
Meantime, another long-lived local favourite, Nomeansno (who play the Anza on April 3rd) are currently in Japan, maybe tourin' a whiskey distillery. Hope they're havin' fun... Me, I gotta sort my fuckin' tax receipts, mark my student papers, and square away report cards for next month...
Posted by Allan MacInnis at 9:49 PM