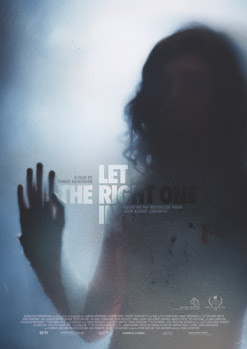 Three great films seen today, probably the last fest fare I'll be able to take in (tho' there's an added screening of Chomsky and Co. on Friday at the Vancity that might be appealing).

Let the Right One In (or, in Swedish, Lát den rätte komma in) was particularly delightful to me in that a group of high school students were brought to the screening by their teachers, because, I'm told, "it deals with themes of bullying." Though this is kind of like screening Psycho for GLBT teens because it deals with gender confusion, the spectacle of high school students giving rapt attention - because these kids, the occasional titter aside, were immersed - to a restrained, tastefully-made Swedish vampire film with a fairly, uhm, transgressive moral centre - was fascinating; though normally I like a quiet screening room, where the reactions of the audience don't distract me from having my own experience of the film, the way these kids engaged with this film made my codger's heart warm with hope for future generations: they were all right by me, as was the film (which was still effective despite the occasional disruption). By contrast, I have no doubt a couple of the teachers had grievous concerns about the way the young protagonists' story is resolved; I can't imagine how this film will play in the United States of Asininity - the sort of people who think Harry Potter is Satanic will have an aneurism when they see it, not that they would go see a subtitled film. It adds a neat new twist to vampire lore, too: what happens to vampires when you DON'T invite them in, but they come in anyhow? More on the novel on which it is based here. 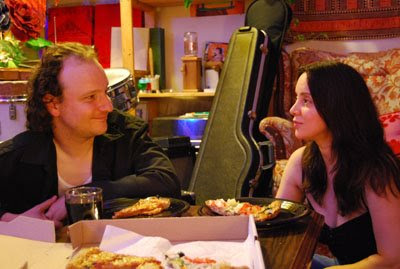 Tom Scholte's film Crime, meanwhile, is so good and so the sort of film I want to support with my writing that I am presently somewhat dumbstruck as to what to say about it. My ideal reader has likely already seen Bruce Sweeney's Dirty, one of the most remarkable films to be made in Vancouver, in terms of what it captures about life here; Scholte, of course, acted in that, as well as Sweeney's previous film (Live Bait) and his subsequent (Last Wedding). (He also acted in Larry Kent's The Hamster Cage, a film I must confess to having missed). Crime so surpasses Last Wedding and Sweeney's most recent work, American Venus - which I found kind of silly, truth be told - that it makes me wonder if maybe Scholte was more involved in the creative process for Dirty than I'd previously realized... And if that ideal reader should have missed Dirty (which is still to my knowledge unavailable on DVD, not widely distributed on VHS, and seldom screened - so I can hardly be that outraged), they should be sold immediately on the fact that this is a locally shot Dogme film, beginning with the Dogme certificate and all. If these two details aren't enough to entice you, what the hell am I supposed to say? That it tells the stories of a conservative hockey player, a confused young, emotionally fragile female student, a stuggling pot-smoking musician with a beer belly (played by Scholte) and his girlfriend-in-recovery (played by Scholte's wife and fellow Sweeney alum Frida Betrani)? That it invites you to laugh at some very dark moments, but is ultimately a very moral and thought-provoking film? That it contains a very interesting and provocative critique of masculine identity and hierarchy and how these function in our society? Fuck it: leave the job of making the film comprehensible and enticing to lowbrows to Katherine Monk or such; anyone who is with me this far surely realizes they need to go see this film. Tomorrow, if you can - it screens at 3pm. The less I say about it - the less you know - the more powerful an experience you will have; I'm cooking up plans to write more on it in the future. Someone else has interviewed Scholte here, if you really need more. 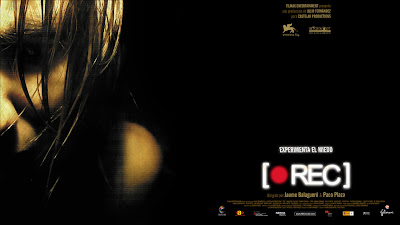 Finally, there's [REC] (official site, in Spanish, here). Call it 28 Days Later - or 28 Weeks Later, more accurately - shot in close quarters with a shakycam, as a group of people are quarantined in a building where a virus is on the loose, transforming the infected into rabid unstoppable murderers. It's the sort of film that strives to ratchet up the tension (and the hysteria) to unbearable levels, and the last half-hour had me jumping constantly. I liked it best before the rollercoaster got rolling, in fact, since relentless shakycam stuff - Blair Witch, Cloverfield, whatever - starts to all sort of blend together in my mind, just as too much music with the knobs turned to eleven starts to ultimately have a numbing effect - but I don't mind the odd jolt of extreme cinematic experience, and this is certainly that. What was it that Ray Hicks said - a little adrenaline cleans the blood?

...Plus there's something very compelling and contemporary about "infection" as the source of terror, or the transformation of the human to the rage-driven, to borrow some of Alex Garland and Danny Boyle's nomenclature. Rather than continuing to liken such films to zombie flicks, I think it's time to invent a new genre for them. Rage-infected films tend to differ on many substantial accounts from zombie films, since the virus in rage films is manmade and more of a threat in and of itself, does not result in death, and leads to fast, strong, and sometimes quite smart zombies, rather than slow stupid weak ones. Cannibalism and morbidity, and the busting of taboos around death - which play a strong role in zombie fare - are displaced by violence and hysteria, and the apocalyptic tendencies of zombie films - especially Romero's - are generally replaced with smaller-scale concerns: the question is not what to salvage of our values in a society that has destroyed itself, but how to survive within a perimeter, or make it outside, where things are (for the moment) still safe; there's a strong element of problem solving under stress that the survivors are confronted with - a video-game like need to get to a certain place, find a key, and find an exit, all of which is very much present in [REC]. Tho' it's not a masterwork, I liked [REC] a lot more than either of Romero's last two films - Diary of the Dead, also a shakycammer, feels kinda tired by comparision. [REC] is being remade by Hollywood as Quarantine, and I liked [REC] enough that I will likely see the remake, too. You probably won't get another chance to see the original, by the way, so if you're free tomorrow (and not going to Crime), you have at least one other chance... Teaser trailer here.

Didn't George C. Scott once act in a film called Rage, about a man infected by a virus that drives him insane with anger? Then there's Cronenberg's Shivers and Rabid... I suspect these films have more to do with [REC] than Night of the Living Dead... I wonder if anyone has optioned the old "Night of the Jackass" serial from Warren's Eerie magazine? 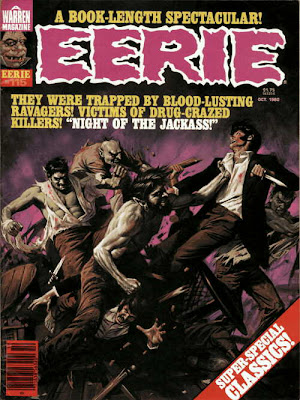 I have other stuff going on, so I think I'm done VIFF coverage for now... Hope you saw some good movies! A great fest, as always... thanks especially to the VIFF folks for getting construction to let up on Granville for a few days! Cinema 1, Construction 0: yay team!
Posted by Allan MacInnis at 11:30 PM

Thanks for the John Lindqvist mention. I've just reserved the book from the library. Wikipedia sez he got the book name "let the right one in" from a Morrissey song. I wonder if that's a line or title? I still lurve the man but haven't kept up w/his releases.

Vampires are HUGE. I'm totally digging the True Blood show on HBO. Based on the eight Charlaine Harris Southern Vampire Novel's which are a super read. It's staying pretty much true to the books (er, 'cept Granny was already gone when the series begam, having her demise this way makes total sense.) The show is going to be a hit, there are plenty of twists to come.

I know a couple of Judiths at the moment, but I assume this is the Alex-Chilton-fan-Judith, since the other doesn't tend to Mwah. They were handing out free screeners of the first episode of TRUE BLOOD at the VIFF, but TV programs I must compulsively watch are the last thing I need right now, so I gave mine away to a Jean Claude van Damme fan in the auditorium for JCVD.

I'm tempted to read the Lindqvist book as well, but so far on my plate I have:

a) Chris Walter's PERSONALITY CRISIS book, which I will be writing about, a tad late
b) a friend's unpublished novel that I'm keen on reading (I think that there are going to be sadistic sexual fantasies directed at celebrities in it, which sounds like an utter hoot).
c) Joel Thomas Hynes' second novel, RIGHT AWAY MONDAY
d) a book about preparing to deal with the mortality of ones loved ones - an issue in my life
e) Maryjane Meaker's memoir - I think I've spelled that right - about her love affair with Patricia Highsmith.

Then there are the things I am slated to write - a list of articles too long to begin to go into, though this weekend will involve Jeffrey Lewis, Danny Shmanny, Gerry Hannah, and maybe Jaap Blonk if he gets back to me... Oh, I should be emailing Josh Stevenson, too. I haven't even begun to think about Pauline Oliveros or Diamanda Galas... And then there's Nels Cline, Mats Gustafsson, "The Noisy Women of Vancouver," and much more... I would need a year off work to get them all done. Maybe I should apply for a grant? Jeez.