A Guilty Pleasure, plus a Mel Gibson film I gotta see (no shit) 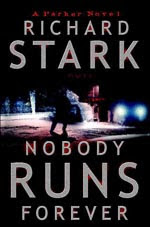 When I was in my early 20's, I went through a phase where I read a whole whack of Parker novels. Parker novels - written by Richard Stark (actually Donald E. Westlake) - chronicle the various "jobs" of an intelligent, methodical, and rather cold career criminal named, you guessed it, Parker. They're as stripped-down, hard-boiled, and functional as the character they depict: they detail the planning of the crime, the execution, the problems, and the payoff - and nothing much else. They seldom are more than 200 pages long, and can be read over a couple of nights with great ease. To my embarrassment, as a young man, I fell in love with the razorlike utilitarianism and determination of their main character, with the plausible imaginings of heist after heist, with the peek into a secret world of men who lived strictly on their own terms; they were tough, manly books, completely in dischord with my liberal conditioning, and I ate them up - I must have read at least 10 of them, which, considering there were only 14 written at the time, is impressive indeed.
The initial series ran from 1962 to 1974. In 1998, with Comeback, Westlake returned to writing as Stark and offered the first new Parker novel in years, roughly corresponding with the release of a Mel Gibson vehicle, Payback. It wasn't the first Stark novel to be filmed - there's also Point Blank, The Outfit, Godard's Made in USA, a terrible Peter Coyote film called Slayground, and two I haven't seen - The Split and Mise a Sac. The first two on the list are probably the closest to the spirit of a Parker novel, with Lee Marvin narrowly beating Robert Duvall as a bigscreen Parker (though Westlake apparently prefers Duvall). I was actually really excited when I heard Mel Gibson was going to play Parker (or Porter, as the movie calls him), because he comes closer still to looking like the Parker I carry around in my head.
The film was a disappointment. It was, God help me, cute: despite taglines like "Get Ready to Root for the Bad Guy," it really didn't have the balls to be a Parker film. It had comedy in it, for Godsake. Parker cracked jokes. There was a smarmy voiceover narration. Lucy Liu cracked a whip. It was an amusing, forgettable experience, with hints at times of how good it could have been, in the few moments where it actually took itself seriously.
I'm reading my first Parker novel in 10 years or more, picked up on a whim at Book Off, and, in doing a bit of online sleuthing about recent developments in the world of Parker, have discovered that in fact, the version I saw - that any of us saw -- in the theatres was not how the film was meant to be at all. Director Brian Helgeland, then a novice, had in fact made a serious, grimy, relatively humourless film that crossed all sorts of boundaries and harkened back to the gritty crime films of the 1970's. Mel beats up a woman. A dog gets killed. There are no cute jokes. The ending is ambiguous but downbeat. The first cut was, by all accounts, a dark, brutal noir - exactly what a Parker adaptation should be. And the studios, with typical courage and artistic integrity, took the film from Helgeland and re-cut it.
This, unfortunately, is not unusual. Even the recent shitty remake of The Invasion - see my review last month; I can't be bothered to link it - came to us in a version significantly altered by the studio; they not only re-edited it, they shot new footage to make it seem more exciting, more in accordance with whatever their marketing research told them audiences want to see this year. Because the film - which is exactly as mediocre as you'd expect, given this, reflecting no-one's vision whatsoever - tanked at the box office (getting a generous 20% on RT), there will likely never be an opportunity to see what Oliver Hirschbiegel intended for us. I have no idea whether his cut was any good or not, but I have no doubt it's far superior to the negligible piece of shit the money boys made of it.
For some reason, though - Mel Gibson's recent notoriety, or the relative darkening of cinema post 9/11 - against all odds and with Gibson's participation, Helgeland's original cut of the film has been issued on DVD. Called Payback - Straight Up, it features a director's commentary and featurettes about the changes made to the film, which I am dying to hear. I absolutely MUST see this film, as soon as possible. It could be the best Parker adaptation yet to hit the screen.
Or, well, okay, it never hit the screen, but at least it's out on DVD. I will actually make time out from the film festival for this one. I am genuinely excited by this.
Go figure.

Many details I left out are in the DVD Beaver review here - a good site for getting info and seeing screenshots, like the one above; check their Release Calendar, too, for a good listing of films coming up.
Posted by Allan MacInnis at 2:03 AM