Ferdy Belland on the Furies, the Dishrags, and so forth 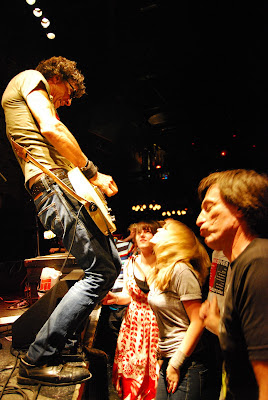 Chris Arnett of the Furies, by Femke Van Delft


Hey, y'all - Allan here. Thought this might be of interest - Nerve photographer Femke van Delft and I were at the under-attended, under-hyped Dishrags/Furies "30th anniversary of Vancouver punk" show; my piece on the night is in the current issue of the Nerve Magazine. Turns out that Nerve writer Ferdy Belland was also there, and submitted his own review, unsolicited. In many ways, his is a better piece - he was there for the whole show, for one, and knows way more background about some of the bands than I do. It deserved publication! So here's Ferdy's review of the night, and a couple of Femke's photos.

This JEM Productions event was hailed by many as the 30th Anniversary of Vancouver's 'Summer of Punk,' and although the surviving attendees of that long-ago concert at the Japanese Hall were somewhat thin on the ground at Dick's that night, it was amazing that no less than two of Western Canada's earliest punk units were reformed in fine form for the show.

Search Parties almost severed the show's jugular before the show's heart could really get pumping, if only because they were so teeth-grittingly lousy. Granted, there was about 30 seconds’ worth of smirked amusement in watching a barefoot, howling young man in a hospital gown, jerking and spazzing about onstage like an electroshocked asylum inmate, slashing half-tuned un-chords from his acoustic guitar while the touchingly cute girls in the band bing-ed and ting-ed along with him on melodicas and Casio organs...all to the Maureen-Tucker-sitting-in-with-the-Shaggs beat of the drummer...but all in all, this is yet another pointless 'art' band you could have seen at Hoko's a few months back. I'm sure they're all nice kids and all, and were on the bill since one of the bandmembers was the daughter of a local punk luminary, but there needed to be an ex-Only staffer onsite to do them any critical justice. I needed a beer, with more to follow.

The electrifying appearance of Seattle's Bug Nasties woke everyone up from their post-Search Parties doze with a galvanizing set of soul-drenched rock and roll that evoked the OD'ed ghost of Johnny Thunders out of an overdriven halfstack. Leading the power trio, vocalist-guitarist Brother James Burdyshaw gets oldschool Sub Pop props from having once fronted Cat Butt, but here he seemed like Malcolm McLaren fronting the Commitments, counterpointed by the endearingly geeky Scott LaRose on bass and drummer Vic “the Stick” Hart (half Al Pacino, half Sonny Bono). Honest-to-Baal groovy rocknroll which would scorch Bryce Dunn’s moptop with their winning combination of garage-mod rave-ups; people began filing out onto the dance floor and frugging, for frug’s sake. The Bug Nasties have no choice now but to return across the border tout-suite, if only so we all can dress up sharp and shake our asses like there’s no more GST returns.

Vancouver’s punk princess Siobhan Duvall strode onstage, celebrating her 40th birthday in glamourous style (looking absolutely sleek and stunning in her high heels and a glittering, skintight crimson dress cut up to here) and chopping out her familiar set of garagey pop-punk tunes, fleshing out her unapologetic Debbie Harry worship with yet another pair of young black-clad journeymen on bass and drums. Although new songs don’t seem to come quickly for Duvall, the personable ex-Bombshells guitarist has been truly immersed in the city’s punk culture for over twenty years, as she happily remarked between mid-set shots of (pink?) liquor. Duvallstar’s set climaxed with a truly killer version of the Dead Boys’ “Sonic Reducer,” with the Furies’ Chris Arnett sitting in on lead guitar (more on him later). 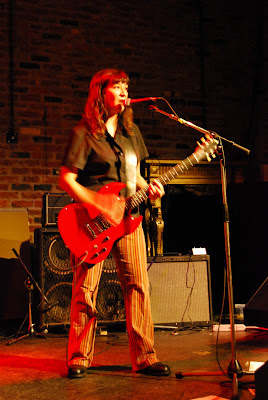 Jade Blade of the Dishrags - Photo by Femke van Delft

This writer used to bitterly wonder where the hell inept sloppy-pop (cuddle-core) bands like Cub and Celestial Magenta came from, and to finally see the legendary Dishrags in action is to finally understand – and to accept with an open, warmer heart. Every time Carmen “Scout” Michaud missed a beat, it truly touched me. I didn’t feel cheated, and neither did the milling dozens who began filing out of the darkness and up to the stage to catch the love up close. You could see Scout leaning down low over the snare drum, peeking out with a sheepish grin at guitarist Jill “Jade Blade” Bain, but the mood onstage was too lighthearted for any return-snarls of offended professionalism…this was the Dishrags! Only smiles were sent back to the drum riser. Bassist Chris “Dale Powers” Lalonde’s elfin china-doll looks caught a lot of admiring looks from the nose-ringed hardcore boys in the crowd, but punk keeps everyone ageless, as it should. I’ll take the Dishrags over Shonen Knife any day.

The Furies are hailed as Vancouver’s very first punk rock band, even predating DOA, and holy shit - were they a treat to behold. Chris Arnett is one of the very few local frontmen who can honestly swagger cockily onstage without looking like an asshole, even if he’s wearing shades and a sleeveless T-shirt…that ensemble, completed with his dark curls and his overdriven Gibson, made it seem as if Lou Reed was re-writing Bruce Springsteen. The big bad bald bassist bulged his shirtseams with his biceps, and the drummer hacked and pounded the beat until everyone’s head was happily nodding along. Very much a sight to behold as Arnett kept stepping atop the front-end speaker riser to rip through frenetic guitar solos which were almost in key and always on top. The Furies gave one a glimpse into times when ‘punk’ was more about attitude than codified sound, and one hopes that we won’t have to wait until August 2037 for their next set. Calling Wendy Thirteen!

The only real beef I had with the show was Dick’s being half-full, but like the early punk shows that first lit up this rain-sodden burg, it’s always a case of quality versus quantity. We were there, and the coked-out meatheads at Skybar weren’t. 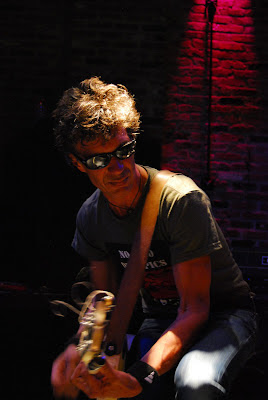 Chris Arnett of the Furies, photo by Femke van Delft
Posted by Allan MacInnis at 2:39 PM

Okay... where to start with this review.

Let's start with the oddly inaccurate. Siobhan Duvall was wearing high top sneakers, as she customarily does, not high heels. And The Furies did not reform for this show. That happened back in January for another JEM show at Richards.

Then let's move on to the ironic. The author of this review wails on Search Parties for not playing well, and then gives Scout a pass out of respect for her seniority.

We'll move onto the strange. The Bug Nasties put on a perfectly acceptable performance, and they may be the nicest people in the world, but I saw nobody "fruging", except for the singer, who made a brave but slightly embarrassing attempt to get the audience going by walking out into the crowd and begging someone to dance with him. One day I may meet the gentleman, and feel compelled to apologise for taking him to task on this, but it really was uncomfortable to watch.

The Dishrags and Duvallstar put in a good show, and The Furies seem to get stronger every time I see them (this was not, as was implied in the review, their first show after being reformed). But if what you're looking for is the punk attitude, honestly, your best bet is Search Parties. They need to play more and fine tune their set a little, but it was -that- kind of youth, energy, and imagination that sparked the revolution that originally brought us The Dishrags and The Furies in the first place.

See the trick, kids, is that the whole punk thing is not in the chords or the clothes or the people, it's a contextual thing. Punk is defined by how it reacts to what's going on around it.

Hey. Allan here, not Ferdy, and I didn't see what Duvall had on her feet, and I arrived for "Sonic Reducer," so I can't really vouch for the other opening acts - Femke liked the Search Parties well enough, if I recall - but I'm just curious, Sly (if you look in on this) where does Ferdy imply that this was the Furies' first show after having reformed? I'm scrolling up and down trying to spot it, and I can't, and it's giving me eyestrain.

Sly Revolutionary said...
This comment has been removed by the author.
8:07 AM