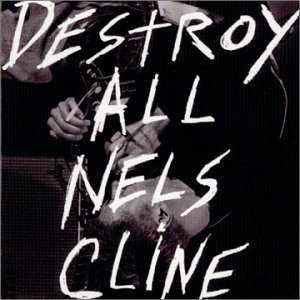 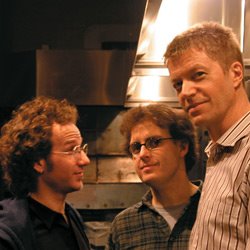 Attention, y'all: guitarist, improviser, and rock/jazzworld straddler Nels Cline plays tomorrow night (Tuesday) at Rime with Peggy Lee and Dylan van der Schyff, as a pre-jazzfest improvisatory appetizer (also weirdly featuring Christian Thorvaldson of Slow and Copyright... Hmmmm! I don't know JP Carter, but he'll be there, too...) Of course, y'all will ALSO be wanting to see the Nels Cline Singers when they play on a double bill with Mats Gustaffson's band, The Thing, at the Culch on the 23rd, and you'll definitely want to be at Rova's Coltrane project (which Peggy Lee will also be participating in), the Orkestrova Electric Ascension (who've actually recorded, tho' with a slightly different lineup -- it's a terrific disc). Nels is a VERY interesting guitarist, with more jazz chops than Thurston Moore or Lee Ranaldo but a similar ability to rock out and/or venture into realms of controlled chaos. I interviewed him for this month's Discorder, of course -- it was really cool to talk to him, and I'm hoping to say hello to him tomorrow, mebbe pester him to sign a CD... Here's a couple of quotes I didn't really work into the article.

I asked Nels about his guitar solo on "Handshake Drugs" on the Wilco live disc he appears on. I somewhat stubbornly wanted to prove my snobby thesis that he can't possibly enjoy playing for Wilco that much, given how much more exciting us SERIOUS LISTENERS find his own music, but... He was steadfast in saying good things about Wilco -- he really likes the experience of playing with them, has great respect for Jeff Tweedy, and is totally non-egocentric about any of it, from any angle. He disagreed that his solo on that track in particular shows (as I thought) him champing at the bit to break free of the restraints of the popsong: quoth Nels:

"I try to stay in the character of the song, I’m really not trying to explode out of it. I just want it to be not just exciting, which is good, but classic sounding and memorable – a memorable listening experience, that’s all I’m trying to do. I definitely don’t want to sound like I’m from some other planet and everyone else is on planet Wilco. I have a lot of latitude – everybody kinda wants me to do what I do – but also I’m trying to use taste and restraint and be part of the orchestra, that’s what’s fun about it, that we’re all in that zone. "

I asked him -- you can sense this theme arising, about the rock world vs. elite, sophistimacated, improvised music -- if he suspects that Lee and Thurston are getting pretty bored of Sonic Youth, and are basically just keeping it alive to support themselves -- if it's become a dayjob; I thought Sonic Nurse was, and now think Rather Ripped is, pretty uninspired and the last Sonic Youth show I saw, in Vancouver a year or so ago, looked like it was no fun at all for them. But Cline wouldn't go there either:

"I’ve never actually asked him how he feels about how the Sonics are right now. I haven’t talked to Thurston that much in a little while – we have a lot of near misses – but I think if it was a job he didn’t want to do he wouldn’t be doing it. I think that Sonic Youth have maintained their momentum and their own integrity, and it still sounds to me like they enjoy doing playing, that’s why they do it. "

I then decided to just stop asking about rock music and rave about his recording with Wally Shoup, who he played with when last in town. Called Immolation/Immersion, it fuckin' SMOKES, from a free jazz point of view. Or maybe it blisters, or steams. It generates HEAT, in any event. Smoulders?

"Oh yeah, but I mean, to me, that taps into my own world of sound, but as well, everything that I’ve accumulated over the years as far as an idea about how to play free jazz, so called, so certain aspects of my vocabulary that also -- something about how I just hear when I’m playing with a saxophone player in a free setting. So I don’t really think about it too much, I just go – with Wally – you just GO, we just start playing, and I don’t really judge it too harshly, and it usually ends up being something I like to listen to, but we didn’t start out with any kind of agenda then, y’know, Chris and Wally just came to LA to play with me and I said let’s go to my friend’s studio for four hours, and it was more like two hours, but that was that and then we went had a gig, and we listened to it later, and we’re all thinking, wow, pretty GOOD!"

We got onto the subject of his feelings about Coltrane -- one of his big musical epiphanies, which you can read about in the Discorder interview and elsewhere online -- and I had occasion to comment that his discovery of Coltrane, when he was a rock-listening-to-youth, in many ways seemed to parallel my discovery of Ornette Coleman, when I was a rock-listening-to-youth; Coleman expanded my sense of what was musically possible and started me exploring jazz in an obsessive way, leading me to the music of Don Cherry much as Coltrane led Nels to Miles. Mr. Cline had this to say about Ornette:

"Ornette was certainly also crucial, but my brother was way more into Ornette than I was, it took me a little while, because I think the somber aspects and the overt poignance of Coltrane’s music at times was appealing to someone like me, and Ornette’s music sounded so HAPPY at times – it kind of eschews a certain kind of drama that I’m drawn to, y’know? "

We got onto the topic of jazz audiences and how they respond to his music relative to Wilco fans (who are much more welcoming, I discovered). Nels commented that he doesn't even know if his audiences are primarily jazz audiences.

"I’m immersed in this Andrew Hill project, and I was playing his music and we played concerts before we made the recording that’s coming out this fall and I guess those people who were there were jazz people, because it’s a jazz composer and a jazz type of group, but it wasn’t a strict jazz way of playing the music… It’s a sextet. It’s with the Singers rhythm section, Devin Hoff and Scott Amendola, and Bobby Bradford on cornet, and Ben Goldberg (of the New Klezmer Trio) on clarinet and Andrea Parkins on electric accordion. Bobby as you probably know played with Ornette before Don Cherry, he goes way back with Ornette, he’s 71, and then Andrea, who is a New Yorker, who does a very un-obvious kind of accordion, so it’s something I wanted to try and it was pretty rewarding. It’s kind of jazz... It’s really hard to categorize at times, but it’s jazz-based, I mean, certainly. He’s an African American composer par excellence. Check out Point of Departure, uh, is one most people like… see what you think."

I didn't mention that I had never heard of Bobby Bradford, but it sounds like a very cool project. I then asked Nels about his time in Vancouver, and if there were any acts that he was keen on seeing.

I mentioned that McCoy Tyner and Bobby Hutcherson were going to be here.

"Well, I always used to love hearing Bobby play when I was coming up. My brother and I always used to go see Bobby every chance we could get. McCoy too, for that matter, back in his piano-smashing days. I know he’s gone a little more back to his early sound… I’ll certainly want to check some things out. "

Towards the end of our conversation, I thanked him for informing me (via his website) that Saccharine Trust had regrouped and were playing live again, and had even cut a new album. I'd had no idea. (Y'all should go check out Surviving You Always. "Craving the Centre," "YHWH on Acid," and their cover of "Peace Frog" rank up there with the greatest moments ever put out by SST. Really).

"They’ve been doing it for years – they’ve just pissed me off because they haven’t done in a new record in years, now. They’ve got to get stuff on record, man. They’re burning. If you haven’t heard that last album – it’s pretty hard to find – God, mental block on the name, but that record is fantastic, and the new stuff with Richie Hoss on electric vibes is just amazing. My friend Brian Christopherson is their drummer now, and he’s a really good drummer in both the jazz and improvised music world as well as rocking out with Saccharine, so he’s the perfect guy for that job."

Finally, I asked him about his name.

"Nels is a Danish name, I’m named after my grandfather, Nels Nelsen."

That's the stuff that DIDN'T make the Discorder. (I also didn't try too hard to retain his style of speech, which you get more of a flavour of here; he seems like a relaxed, unpretentious, likable guy, very intelligent, with a great love of improvised and jazz music. It's a bit shocking to me how open he is to chatting -- he's the friendliest of the huge-name improv people I've met, much more than Fred Frith or Eugene Chadbourne -- who were both nice enough but kept their space to themselves). I have some quotes from Scott Amendola and Devin Hoff, too, but I gotta go to dinner and revisit this to add links, so I think I'll call it a wrap for now. Thanks to Nels Cline for taking the time out (and to Scott and Devin for answering my emails). I am looking VERY MUCH forward to seein' these guys play. As Nels Cline reminded me, the Nels Cline Singers do NOT get to play live very often, and this should be a very special concert indeed. Plus the Rova and Rime things. Oh, hell, the whole goddamn festival sounds pretty good. I mean, Zu? And Maja Ratkje's back, tho' I didn't win her over with my weird interview questions (I keep wanting to discuss elitism in noise music with someone).

(PS: just got back from the Rime gig, and it entirely rocked. It blew me away. I'm normally not a fan of Dylan van der Schyff, but he FUCKING COOKED tonight, and he and Nels found an amazing space together. ANYONE who wants a memorable musical experience should GO TO THE CULCH on the 23rd, and see Orkestrova too. I MEAN IT!).
Posted by Allan MacInnis at 6:47 PM