Casuistry: the Art of Killing a Cat at Cinemuerte 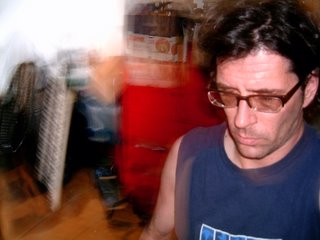 Having interviewed Zev Asher, the director of Casuistry (pictured above), I felt somewhat obliged to see his film, but also reluctant. The controversial film, dealing with the actions of and reactions to the cat killing perpetrated by Ontario artist Jesse Power, begins with a clip from a performance art piece by Governer-General's-Award-Receiving Hungarian-Canadian performance artist Istvan Kantor, in which two live cats are gutted, placed on the heads of the "performers" who gut them, and set on fire. The description in the Cinemuerte guide describes the piece as a "vivisection," a somewhat misleading word, suggesting something altogether more surgical than what you actually see in the film -- I imagined a wailing cat being cut open in close up, and I didn't much want to watch that. Also, some part of me shared, I suppose, in the reaction against Power and his confederates; I didn't really care what justifications they gave for their actions -- knowing little of the case save a few online articles, I didn't want to give them a chance to make their act of torture and cruelty into something I could understand.

Remarkably, Zev Asher manages to do just that: to make Power and his actions comprehensible, while asking some extremely disturbing and unsettling questions along the way. Power comes across as a morally serious, intense young man (of an admittedly somewhat morbid bent, but that's true of almost all intense artists in their 20s) earnestly using his art to examine the world around him, probing, for him, what is a deep problem of conscience: the consumption of meat. A former vegetarian -- a detail I left out of my article because I thought, film unseen, that it seemed a poor pretext for defending him -- Power, in deciding at age 20 to begin eating meat again, after six years of abstaining, wanted to know what the moral consequences of his action were. To this end, he got a job working at a Toronto abattoir, where he helped prod pigs along to their death, treating them with compassion where he could, but mostly just trying to come to terms with what the decision to eat flesh foods entailed. He quit when he found himself growing inured to it. "To be conscious of the slaughterhouse is to be conscious of what human beings are," Power explains; there's a lot in human life that we don't talk about, that we hide, from going to the bathroom on up, and our consumption of meat is one such thing. Why do we treat some animals as sacred while freely slaughtering others in inhumane ways? It's a difficult question, and one we seldom ask. At one point, one of the more articulate attackers of Power in the film -- because Asher interviews people from all across the spectrum -- says that she doesn't want our art galleries to become slaughterhouses, but Power distinctly disagrees: they should "merge," that we may learn what we are.

It becomes clear in the film that this area of concern is a driving force for Power in his art; after working in the slaughterhouse, he gets a job as a renderer at a University, working with exotic dead animals, and brings his video camera to work, making a short film, "Dead Animal Disco," in which he makes the animals, including a skinned baby orangutan, "dance" by a sort of stop-motion photography. He also makes -- as a school project for which he receives an "A" -- a film in which he cuts the head off a live chicken and then cooks and eats it. He makes another film involving a pig carcass, and writes a song called "The Anti-Meat-Eating Song" ("I used to eat meat/ but that's because/ I did not know/ What it was" -- he describes in the lyrics how his consumption of meat leaves the ghosts of dead animals inside him, crying to get out; Asher begins and ends the film with it). Clearly this is an area of moral crisis, for Power; it's a take on the problem of cruelty in the natural world, asked by someone for whom the concept of Original Sin cannot possibly serve as an answer. There is no suggestion at any time in Power's words or attitudes that, as police suggest in the film, these projects reflect a sadistic fixation or a sign of mental breakdown -- the first steps on the road to the creation of a serial killer, say, tho' public hysteria framed him in that light. Asher manages to convey, without ever directly stating as much, that the strong reaction that Power's actions provoke have more to do with the validity of his questions and the effectiveness of his actions in drawing certain issues to light, than they do with any exceptional evil in him. To my great surprise, at the end of the film, I had to conceed that Power is an artist, and his project here, began (at the very least) in the spirit of art, whatever its actual results.

That said, there is no excuse for what Power and his companions do to the (presumably owned) cat they steal off an Ontario street. High on datura seeds -- the issue of drugs and their effect is the one element of the film that Asher doesn't deal with quite so effectively, raising more questions than are answered -- they make a five-minute ordeal of the killing of the animal. Five minutes is a very long time to make something suffer intensely (I know, because I've killed fish when fishing, and once did such a bad job of it that I haven't wanted to fish since); the cat stays alive through its evisceration, and the incompentence of its killers, who, to their later shame, clearly were not prepared for how difficult the job would be, is captured in detail on video. (We don't see the video, thankfully, but we read onscreen a minute-by-minute description of it prepared for Power's trial). Whether drugs play a role or not, the description of what the boys do -- because they seem more like boys then men -- suggests a capacity for violence, cruelty, and denial, and there is good reason for making such cruelty illegal and for punishing those who inflict it. (Power and one of his friends involved in the piece pled guilty to the charges, and Power seems to feel considerable remorse). Slaughterhouses are also cruel places, though... There is much hypocrisy in condemning Power, particularly if we ourselves live off the deaths of other animals...

I was surprised to notice before the screening of Casuistry last night at the Cinematheque a series of pamphlets spread out on a counter -- pamphlets for PETA and other organisations with titles like "What's Wrong with Dairy?," "What's Wrong with Leather," "Pet Shops and Puppy Mills," and "Factory Farming." Had some protesters made demands that such material be made available? I asked Kier-la (pronounced, by the way, "Kayla"), and she said no. Aware of the controversy of the film, which has drawn bomb threats, death threats, and strenuous protests at other venues, she decided to act preemptively and put a table of material outside, to make clear to any protesters who came that she was not their enemy and that the festival shared in their concerns. No one showed, and so she brought the pamphlets indoors; either the event occured below the animal-rights-groups radar, or enough of them have finally seen the film to understand that there is nothing in it for them to be upset about. (It may also be possible that enough time has elapsed that people just don't care anymore -- all public hysterias have their best-before dates). I'd asked Zev Asher about the protests, which targeted him and his film as much as Power: which side of the story left him more uncomfortable, the animal rights activists or Power? Now that I've finally seen the film can I actually appreciate his answer: "The animal rights activists make me more uncomfortable because I don't understand their motives. The film serves their cause very well. They are simply too closed-minded to see it in that regard. Jesse Power made me a bit uncomfortable at first but that was due to the media's portrayal of him as some sort of serial killer in the making. Once I got to know him a bit, everything was fine. He's a nice guy, despite what he did in the past..."

Casuistry is not a particularly easy film to watch, but it's a morally serious inquiry into our nature that provides ample fuel for thought. People kill things, and sometimes do it very cruelly; however wrong Power's actions were, the conclusion Casuistry forces us to draw is that he intended the action in the spirit of serious moral inquiry. He's a confused young man with an intense conscience, not an evil pet-killer with none; Zev Asher has managed to undo some of the hysteria that greeted the case and to ask precisely those questions which motivated Power in the first place, and they're things all of us should contemplate. Thanks to Kier-la for having brought the film to Vancouver (I'll miss Cinemuerte! ...And never yet have I won a DVD draw!), thanks to Zev Asher for having assented to the interview (good luck in Venice!) and thanks to Terminal City for having published my piece!
Posted by Allan MacInnis at 10:39 AM