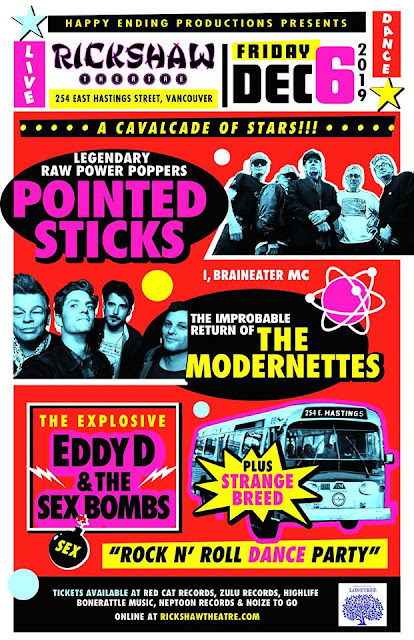 I have a major John Armstrong interview online, apropos of Friday's show at the Rickshaw (technically later today but it's only midnight as I write this, so it feels like tomorrow). If it isn't obvious, I think this new Modernettes stuff (or New Modernettes, if you prefer) is just great (better than the old stuff, actually!). I have a few outtakes for y'all below. (Read the Straight piece first).

Allan: For me, “Delivery Boy” brings two very specific things to mind, even though both are quite a bit eviler than your bearer of bad news: Jim Thompson’s portraits of a simmering but unseen evil under the surface of everyday American life, and a story by Richard Matheson called, I think, “The Distributor,” about someone who moves into towns, and while keeping the façade of normal suburban life, quietly and evilly digs into the discords and tensions that underlie neighbours’ relationships, so they end up at each other’s throats. The seeds of hatred sewn, he moves on to somewhere else. I do NOT imagine you know that story, but are there literary antecedents for that song?

John: Hahaha - I’m familiar with both, and the Matheson is wonderful, written in acid. Thompson was a fabulous writer as well, and terminally fucked up, poor guy. There’s another in a similar vein about a man who moves into a neighbourhood and sows discord among the little community - he feeds on suffering. Shirley Jackson? No... [Some discussion on Facebook brings us to John Cheever's "The Swimmer" as a candidate, but it remains uncertain].

[...but as for] Jim Thompson: Forgotten for years - and barely known at the height of his career - then suddenly everybody knew about him, when Black Lizard put his stuff back in print. In my giddiest moments of narcissism I imagine that’ll be me, dead, and suddenly acclaimed by all. Goddamnit.

Allan: Who are your favourite writers?

Allan: Was there any stuff I've missed?

John: Nope - unless you want more about the books that are out and the ones to come. There’s going to be an audiobook of Guilty of Everything, me reading it. More public readings - we’re talking to people in the UK and Europe about touring in the summer, with the new album out. I can’t wait. I really missed playing and just being with these guys.

There’s still some songs unrecorded or unfinished just because you can only load so much onto the public in one shot without overwhelming them. Books, I have two novels out to go with the three memoirs, two more ready to come out when I can commission the cover art, a horror novel about the Burnaby Art Gallery - the infamous Ceperley Mansion - and a novel about a young transgender witch, named Abra. And another in the research and note-compiling stage, an American theocracy novel. I struggled with this one - I wanted to write something about the fundamentalist Christian faction and the whole Dominion philosophy, but I couldn’t find a way to hang a story on it. Until one day it hit - there’s be a resistance, of course, and that would be the Satanists. They’d be the heroic freedom fighters, the good guys. So it’s your basic battle between good and evil.

Allan: This all sounds great. It's a shame there won't be a Guilty of Everything movie, though.

John: Who knows - maybe if I sell enough books it may still happen. At the worst, I had 20 years of option money. Kurt Vonnegut said Jerry Garcia bought the rights to The Sirens of Titan for a considerable sum and kept making the option payments for decades, year after year, and the movie never got made. Vonnegut said he could live with that.

See you at the show tonight! See here for ticket information, etc.
Posted by Allan MacInnis at 12:16 AM