The Strangest Game of Scrabble in My Life

One of the few games I play on my phone is Scrabble. It's been a favourite of mine since childhood. I'm pretty good - my scores, especially on the phone, tend to be routinely over 400 points, and I have been over 600 points - both on the phone and in physical games - on more than one occasion. I don't usually play with other people, since I'm not that big on connecting with strangers online these days, and don't want to annoy my friends by beating them too badly. Sometimes I do play against Erika, when and if she doesn't mind my winning - usually if we're stuck waiting for a ferry or something, but occasionally while we're in bed, passing a phone back and forth.

Last night we played the strangest game of Scrabble in my life. My app, which is old, has been malfunctioning for awhile: when you pass the phone and start your turn, you can see the letters of the previous player still on your board. You have to press some button on the game like "pass," for example, then cancel the pass option, in order for your own letters to revert to you; a normal game can then be played. But my already faulty app got transferred to a new phone yesterday, and we ended up with new problems manifesting themselves: now the other person's letters, for example, sometimes wouldn't go away if you tried the trick mentioned above. Sometimes you'd be in the process of playing them and suddenly your letters would revert unexpectedly, of their own accord, but sometimes you'd end up playing the letters of the other person (and getting points for the word); at such times, when Erika was playing with my letters for her turn, her letters would sometimes appear for me, so we were essentially swapping identities. Finally, and best of all, as an added, "bonus" malfunction, the Q appeared twice - was played once, then re-appeared on someone's board, then disappeared again; and the Z, of which there is also only one tile, appeared twice, and WAS ALLOWED TO BE PLAYED TWICE. This is an actual photo Erika took of my phone screen: note the Za/ Zags and the Words/Waltz, each using a different virtual Z: 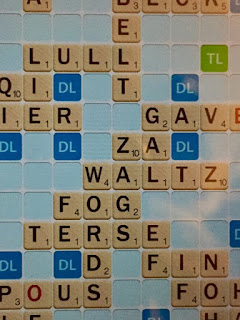 I must say, this malfunctioning Scrabble - arbitrarily changing your letters mid-play, switching our identities, and suddenly providing extra copies of high-value letters - was pretty entertaining to play. We had no input into how or when the game would change its rules, so we had to continually adapt to new and chaotic circumstances - just like in life!  There may be a fun idea here for game developers: for people who routinely play straightforward, rule-governed board games on their phones, create a new app called "Break My App," that completely gnarls the rules the game operates by, introduces random rule-changes and malfunctions that the game player must then figure out and adjust to: "What happened there? How do we play the game now?"

The only trick is, it can make figuring out who won challenging. (For the record, it seemed like the lack of predictable rules put Erika at an advantage last night; she won, though it may be because occasionally the game assigned her my points!).
Posted by Allan MacInnis at 10:12 AM