VIFF 2017: Michael Glawogger and Monika Willi's Untitled, and the case of the nude interviewer

Timezone mixups are fun. I make them myself sometimes: say, I'm interviewing someone in Calgary, which is an hour ahead, but I get it in my mind that they're an hour behind, so I'm planning to call them two hours AFTER the interview was actually scheduled for (which was the case with Art Bergmann last week, though we sorted it out, sorta).  It's less embarrassing for me when someone else makes the mistake, which happened yesterday with my Skype talk with Monika Willi: I'm supposed to call her at 9am - because she's in Austria, some miles away - and she was calling me at 8:15 as, naked and grimy, I was getting ready to get into the shower.

Luckily, I had everything ready to go (and she wasn't doing it as a video call).

There was a fair bit in our talk that did not make it into my Straight interview with Willi; her answers were more elaborate than I sometimes could incorporate into a tight piece of writing, and the combination of so-so audio quality and her excellent but accented English further made a few sentences difficult to transcribe (something I'm getting more and more frustrated with; it played a factor in my talk with Art, too, though there it was only my imperfect audio/ recording setup that was the culprit). I got a laugh out of her when I asked about the dogs in Whores' Glory, if - as I explain in the Straight piece - Untitled was a "just the dogs" movie, a movie just of happy accidents, and she laughed and said, "The dogs! This is very nice, yeah, the dogs. This is very much Untitled, you’re very right.” She went on to explain about how there had initially been music to the dogs scene in Whores' Glory, but it ended up transposed to the Mexico segment, and further, that she felt the dogs scene went on a little too long - but was "not strong enough" to fight with Glawogger to shorten it. But as interesting as that was, in fact I didn't need to use a quote from her at all, I decided, all I needed to know, in asking this question, was that I wasn't, uh, barking up the wrong tree with my observation (damn you, Kenji Yam, you've infected me with crappy puns - Ron of the Straight movies section has been gassin' me on Facebook with jokes on my Caniba article, asking if the film was "yellow journalism," if I found it "hard to stomach," if I found it a bit "stiff" or "in poor taste" or things like that...)

We also talked about Glawogger's book, which I had been previously unaware of, and how it informed the narration. (You can order it on Amazon, but I presume this is in German; too little of his work is available in North America). It started as a question as to why so much of the narration of the film was in the third person:


Michael started to trust his writing and his literary ambition, which grew and grew over the last decade. He had nearly financed a feature film, and then it didn’t get the financing. He had a hole, and in that time he realized a book, a novel, which has been posthumously published, called 69 Hotelzimmer. That is, ‘69 hotel rooms’ - but it has 96 stories, because he likes those films where someone smashes the door and the numbers go around… They are written from the whole world, from his hometown to the most faraway places we can imagine, somehow connected to hotel rooms. And these are written in the third person. And with the publisher, he agreed that when Michael came back, maybe he would choose some of the stories that would happen during Untitled. And then he had these agreements with two newspapers, German and Austrian, to do so-called travelling blogs, but in these blogs he did nothing but continue this kind of writing, which are not travelling blogs. This is the kind of literature which he started writing, and I extracted sentences from. So the 3rd person, ‘he’-form was always there.

Here, I found I only really needed a phrase or so for the article's purposes. It does a bit of an injustice to her answer, simplifies it a bit, but sometimes that's necessary. (I hope if there are problems, if I've oversimplified too much, they will get in touch). I didn't even transcribe the part where Willi explained that Glawogger had initially objected to the idea of using these texts, before his unplanned death, as narration for the film, or that she had laboured over finding appropriate literary substitutes for them, when she was tasked with completing the film. It was revealing, but just took us too far afield from the article, which had to maintain some semblance of flow. It's already pretty elaborate - plus I think the fact that Glawogger could NOT complete the film with new texts of his own, which is apparently what he wanted to do, makes her use of these previous texts fair game... 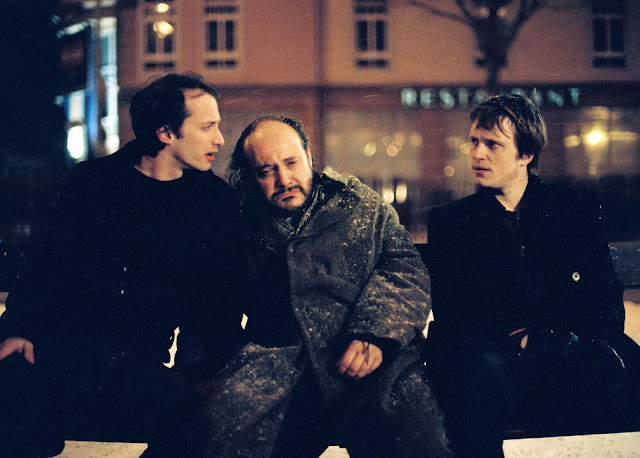 The one passage that I would have liked to have used that I didn't involved his 2006 film - pictured above - called Slumming. (She did not edit that film, note). Not on video in North America (though it has shown on Mubi), it's a pretty remarkable fictional feature film by Glawogger. His young main character in the film, as I recall, is a little bit of a prick, playing, for example, a rather evil prank on a drunk that involves, when he's blacked out, moving him from a bench in one town (or is it one country?) to another, so he'll wake up far, far away from where he passed out, heedless of what has happened to him. But on the other hand, this same character - whom we're invited to judge a few times in the film - is quite earnestly entranced with the customs and cultures he encounters in travelling, has a sort of wide-open curiosity about what he's seeing, which seems to relate to Glawogger's own filmmaking practice  ("there is a way that character looks at the world and finds joy and beauty in unexpected things that seems to connect with Michael's aesthetic," is how I phrased it on the phone with Willi. "But he's also a cruel character and not very likeable"). So was this character meant - I asked Willi - as a self-portrait, perhaps a self-criticism on the part of Glawogger?

"I really start to cry now - you're the first person to ask that question," she answered. "I remember the moment, which he rarely spoke about, about how hurtful it is if many people find your alter-ego unsympathetic? So yeah, you're completely right, this has a lot to do with him. It's just surprising how he did the cast, and everything. But it was self-criticism, a kind of reflection on himself. It has a lot to do with him. And there are two other feature films that would have gone further with that topic, that would have been financed after he got back, so..."

So there we go: I made Monika Willi laugh (at my dogs question), cry (at my Slumming question) and if it had been a video call she would have been speaking to my hairy bare chest (or wherever my webcam was angled - I hadn't had a chance to test it). I also got to ask the one good question I had filed and set aside for Michael Glawogger, should I ever get a chance to interview him, to someone who knew him well and could answer it. I really hope they like the finished article, and that it gets a few people out there to see Untitled...

Note that I elected not to use the Slumming quote in the Straight piece, either, because it again took us too far afield, would have required too much else to set up, but I wanted to put it out there into the world here. I guess I'm proud to have gotten my perception of the film right, though really it's not so hard to see if you watch the film and have seen a few of Glawogger's own documentaries.

If you haven't, Untitled is a fine place to start; chances to see his films on screen are few, and it screens only one time at the VIFF, this afternoon. I highly recommend it.
Posted by Allan MacInnis at 8:43 AM