Hard to believe he's been around since 1987. That's only about five or six years short of my even learning what punk rock was (it wasn't high visibility in Maple Ridge circa 1981-1982, which was when a friend first hooked me with Never Mind the Bollocks).

A marathon of Nardwuar begins at 9pm tonight, on CiTR fM 101.9 ! 20 straight hours of Nardwuar interviews - "ranging from Jay-Z to Michael Gorbachev, from Destiny's Child to Wesley Willis to everything in between!"

Do you all know Wesley Willis? "Suck a Caribou's Ass," you know? I had a fun fifteen minutes sharing Wesley Willis with my wife. Speaking of which, I know a woman (knew her BIBLICALLY, you know - why the hell do we use THAT adverb for sex?) who got a Wesley Willis headbutt, which she was quite proud of. It's almost like having had sex with Wesley Willis himself!

And it reminds me of the time I sat on a toilet seat just departed by Doug Bennett of Doug and the Slugs, but I digress. A marathon of Nardwuar's CiTR interviews tonight and tomorrow, then on Saturday there's this gig! 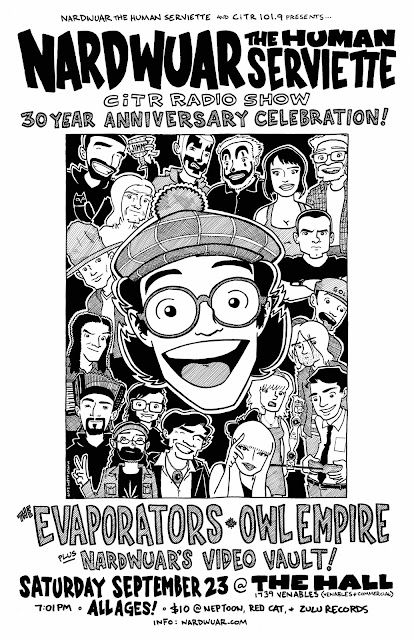 I was delighted to be at the last Evaporators in-store with Nardwuar leading the band out as Thee Goblins (grunting and covered-up and satirizing machoness) and then breaking into a set of giddy, hilarious, high-energy power-pop. The image I will remember is Nardwuar pulling up his Evaporators' uniform to reveal his hairy man-teats for "I Can't Be Shaved," which is right up there, as an anthem for the hirsute, with the Eels' "Dog Faced Boy" (which also works a pun between being "saved" and "shaved," but is nowhere near as funny about it). If I were hairy, this is the anthem I would want.

Funny that there is more than one song about being hairy but no songs at all about being bald. But what can one say about an absence of hair? (Doud Bennett used to observe onstage that men with hats in bars were always bald underneath, and has made me self-conscious for life about wearing hats into bars or clubs, which, let's face it, is a good place to wear a hat; I mean, you're not gonna wear your fancy new hat out in the RAIN, ferchrissake, so where ELSE are you supposed to wear it?).

And speaking of gigs and gig posters, more people should be excited about another show tonight. Go look up Giuda on Youtube, these guys rock - a sort of heavy-glam-meets-Cock Sparrer pub rock - and they're coming all the way from Italy. And the Vicious Cycles MC open (and London ska punk outfit Buster Shuffle, touring with Giuda). Once again at the Rickshaw - another great gig there, one I will even try to peek in on, though tending to my wife's busted foot will also be a factor. Doors at 8pm.

I think I might wear my hat, in defiance of Doug's rule. What the hell. 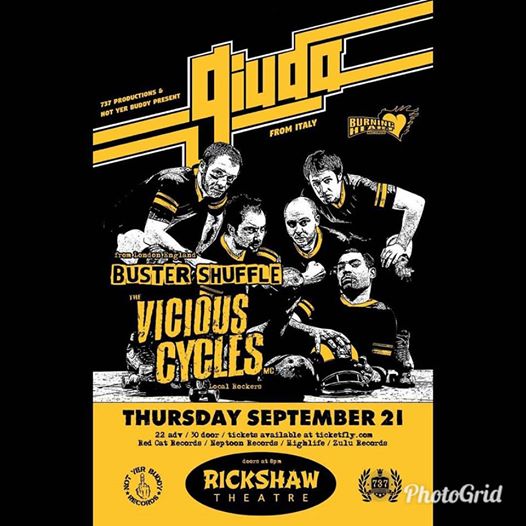