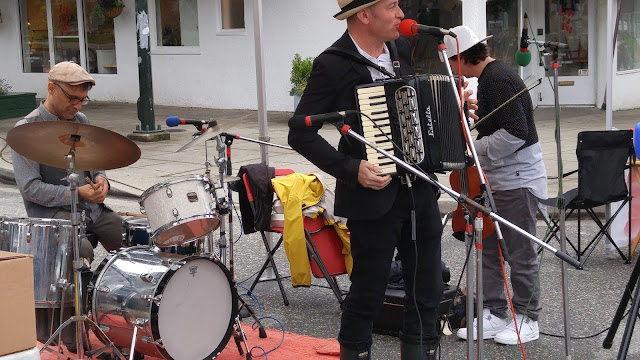 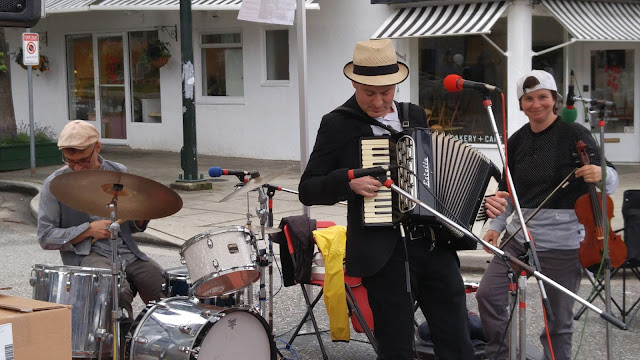 My favourite new song by a Vancouverite is Geoff Berner's "Hustle Advisory" off his new CD, Canadiana Grotesquica. There's a remix version of it streamable online; it's a bit different on the album, a bit more stripped-down, but you'll get the idea. It's brilliant: it captures that moment of insight that sometimes falls on you that academics (or politicians, or artists, or basically everyone) are on some level, whatever true or meaningful or seemingly important and sincere things they say, are all hustlin' to pay their rent, to differentiate and elevate themselves above their peers by striking poses that will grant them status, power, money, and other things necessary to get by. The song is sort of the Fast Eddie Felson version of Nietzsche's Will to Power, wise and really funny, and I'm glad to have caught Geoff playing it live not too too long ago, opening for Rodney DeCroo (also saw him at Car Free Day though I missed "Hustle Advisory" that afternoon, arriving just a smidgen too late). Geoff's show is the highlight of this year's Accordion Noir festival, the centrepiece, and I had promised (Saint) Rowan Lipko...fuck, I have to check the spelling of his name again.

Rowan LIPKOVITS, dammit, Rowan Lipkovits. The Eastern European variants of that name with the W and Z really screw me up: I gotta just remember to spell it exactly how it sounds, none of this Wim (pron Vim) Wenders (pron. Venders) or Adam Horowitz (pron. Horovits) shit for Rowan. Rowan L-I-P-K-O-V-I-T-S (writing it all in caps with dashes in between will surely help me to get this right).

Oh: I'd promised (Saint) Rowan Lipkovits - who was offscreen to the left next to where I was standing at Car Free Day on Main Street when the above photos were taken - that I would, if all else failed (and the Straight didn't do anything), do something to plug Accordion Noir and Geoff Berner's album release this weekend. Turns out the Straight did do something (thank you Alex!), which is great, because I am SWAMPED. I have spent the past week or so on Doug Andrew, presently have my head down trascribing a giant Marshall Crenshaw interview that I did, and have Heather Haley in the wings, apropos of this Zellots flexi-release happening soon. (And then there's Art Bergmann, which is an intimidating prospect, actually). Thankfully Geoff has gotten tons of press for this show, with some unexpected but pleasant features popping up apropos of his Gino Odjick song - including features on Sportsnet and News1130 (!!!).

Meantime, while NOT writing about Geoff Berner or Accordion Noir, I'm busy giving press to a competing gig tomorrow night: Doug Andrew and the Circus in Flames. (Part two of that should be up later today). So not only am I NOT covering the Geoff Berner gig, I'm stealing folks away from it. What an asshole! And guess what? It gets worse, because as much as I want my wife (who has never yet seen Geoff Berner) to see Geoff Berner (she'll love him) - she and I are going to be at Doug Andrew and the Circus in Flames ourselves, because she loves Doug's music, too, and because, you know, when you invest this much effort in writing about something, you gotta actually GO to the show.

The best I am going to be able to do in this circumstance (having already missed the last two days of Accordion Noir events) is to hereby plug and maybe even attend TONIGHT's Accordion Noir event Which - it's a little complex - involves two separate concerts at two separate venues (?!). Part one is a proper "sit down and listen concert" at St. James Anglican Church (303 E. Cordova). The event marks the North American debut of Finland's Antti Paalanen (whose name I have to admit to having correctly remembered the spelling of on one glance, which surely will gall Rowan all the more), who does a kind of surreal, atmospheric electro-polka (which may not be a polka at all, correctly understood, but to me, any accordion music drawing on Finnish folk traditions sounds like a polka; I am an accordion neophyte and vulgarian, what can I say - it's probaby a humppa or something. I bet Rowan can tell a polka from a humppa at a glance). Presumably in the opening slot, also for part one, Vancouver New Music's Giorgio Magnanensi (whose name I also have no problem spelling correctly) is going to do something with Douglas Schmidt (see the clip for "Raw Meat and Butterflies Part One" on the link above). I like Giorgio. I used to write about Vancouver New Music a lot during my "avant garde phase," but it's been awhile, so it'd be nice to say hi.

Part two - which sounds like the full on accordion-driven dance party portion of the evening - takes place at the Russian Hall (600 Campbell), featuring Russian band Iva Nova, Indiana's Lykaire, and East Van's own "Roma-funk" unit Balkan Shmalkan. (I am guessing that these artists also are listed in reverse order). That show runs from 10pm to midnight, just like the Charles Bronson movie. I assume the organizers have thought all this out so we can make it from one venue to the other in time to have a full two-course meal of an evening; my internal GPS is not adequate to guage if they are remotely close to each other. Anyhow, go to the links to hear clips of all these performers!

Of course, Saturday - tomorrow - is Geoff Berner's album release, also featuring Iva Nova, which I won't be at, and Sunday is the Underdog Instrument Grudge Match mash-up event, which I don't begin to understand the workings of (but am sure will be very entertaining).

So don't do as I do, folks. Do NOT under any circumstances come see Doug Andrew and the Circus in Flames at Falconetti's East Side Grill (1812 Commercial) Saturday. Go instead to see Geoff Berner's album release tomorrow instead. And if you really MUST come see Doug Andrew - if you like mandolins that much more than accordions - then at the very least ATONE FOR YOURSELVES by going to an Accordion Noir event tonight (or Sunday), because this is fun, exciting, locally-driven culture that adds joy and creativity and life to our communities, which are important things. 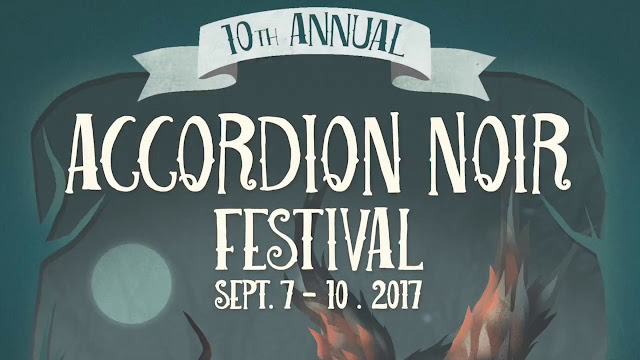 Heh... well, turns out my wife (still a bit weird to type that word but she is, so there it is) wasn't feelin' so well so we left Doug Andrew early, after one set... but I still got her to run me over to the Russian Hall so I could at least by Geoff Berner's new album. The whole thing is brilliant. Some songs are funnier than others ("Phony Drawl" is a real hoot, maybe the most overtly comic song on the album). Nice that there's a little lyrical reference to Doug and the Slugs, too. I got to hear about a live half-minute of "Don't Play Cards for Money with Corby Lund" - the bit about koalas resorting to cannibalism, in fact - as I ducked in and hit the merch table to get it, so I kinda was at both gigs, if only briefly. Doug Andrew dedicated "Down on the Fraser" to me, I think - I ended up shooting video of that song. Maybe he was thinkin' of Al Mader but I don't think so... apparently Sandy Beach (who I saw in the audience) joined Doug on trumpet for a couple songs but I missed it. Anyhoo...