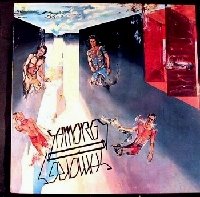 Hm. Pre-K-Tels, pre-Young Canadians, Art Bergmann was the guitarist and vocalist for a band called Shmorgs. We've had two copies of their only LP at Carson Books (3425 W. Broadway) for quite some time, and because the cover art sucks SOOOOOOOOOOOO bad, I never took the time to give it a spin until tonight. Turns out it's pretty goddamn good! It isn't remotely punk -- it comes across as a sorta structurally loose rock album in the Rolling Stones mode -- but Bergmann's vocals and guitar are great and some of the lyrics are really delightful (he even quotes the Stones' "Starfucker" at one point, to rather fun effect). Carson's is still having a 40% off LP sale, so you can get a great deal on this LP (we have the Poisoned EP and one of those later, kinda embarrassing Art LPs, like, the one produced by John Cale or such). If I were still doin' LPs, I would probably pick this up. (As things are, I'm quite content with the Young Canadians compilation CD, tho' I kinda prefer the OOP Zulu track listing, which mixes up the live and studio stuff, to the Sudden Death reissue, which retains the integrity of the original releases...
Posted by Allan MacInnis at 10:19 PM