Fe-mail and maybe Agrare at the Vancouver International Jazz Festival 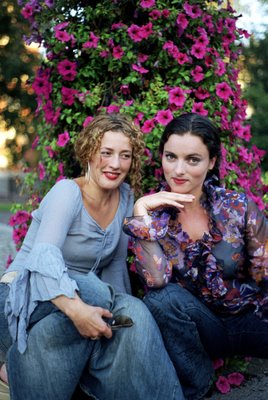 Since you fans of noisy, weird, improvised music are ALREADY going to see everything Mats Gustaffson, The Thing, and Zu are involved in, I thought I'd point out what's likely to be one of the more unique events of the festival, the presence of Fe-mail (that's the Coastal Jazz blurb; see also the link here). Norweigians Maja Ratkje and Hild Sofie Tafjord, both members of the all-woman jazz improv unit Spunk, will be treating us to what will probably be some fairly challenging (but textural and varied) electronic noise, based in part around Maja's vocal performances. She came to Vancouver New Music's Vox Festival a few years back and managed to scare off a whole bunch of people with the sheer intensity of her set (which, in fact, was far more accessible and varied than the punishing noise that Otomo Yoshihide had produced the fest before). I was manning the merch tables, but when Makigami Koichi and Paul Dutton fled the venue, saying it was "too much," I had to see what Maja was doing, and peeked in; those who stayed were treated to an intense, dense, but also (if you knew how to listen to it) playful and engaging hour of music, which, really, wasn't THAT harsh... I'd already noticed her as being probably the most intimidating person in the Scotiabank Dance Centre that night (she's the one with the dark hair in the photo; I dare anyone, male or female or otherwise, to hit on her; I'm certainly not man enough to). She gives the impression of one possessed of a fierce intellect, who doesn't suffer fools at all, and she's got some very cool tastes in music (we got to talking about Japanese improvised music for a bit, and she's a serious fan of the weird stuff). I'd recommend getting out to see this duo while you can; they'll be playing the Western Front on Friday at 5:30 and then doing some Canada Day stuff at 2PM at the Performance Centre of the Roundhouse.

One note: at blog time, there seem to be some complications with Agrare's performance, which is what is actually scheduled for the Roundhouse. Lotta Melin (Mats Gustaffson's partner, a dancer who is the third member of Agrare, along with Fe-mail) appears not to have been able to make it to Canada; she was scheduled to play with Mats the other night at Performance Works, but was replaced by Paul Plimley for a more spontaneous and jazzy set. I don't know what the deal is -- maybe Lotta will make it for the weekend -- but at this point I'm expecting Fe-mail will go on alone. Mebbe I'm wrong. No one tells me anything. What do I know.

Post-script: Maja confirms it. (She was at the Zu/Nomeansno gig tonight -- Fe-mail will be playing without Lotta. They plan to do fairly different things each day, so don't be shy about seeing both events. If you're a fan of noise or of improvised electronic music, you'll be more than amply engaged).
Posted by Allan MacInnis at 8:52 AM