A Silent Hill for Liberals and a Hostel for Reactionaries 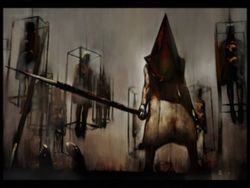 (Image lifted from the excellent Wikipedia article on the game series. Will remove it on request!)

Watched SILENT HILL last night. It does interesting things, but mostly on a subtextual level, and despite some fascinating, psychologically dense, and beautifully crafted images, it fails on various accounts. I'd still recommend it, if you enjoy trying to figure out what disruptions in the collective unconscious horror films are tapping into, and/or what their buried "politics" are; it's particulary interesting in that, like last year's HOSTEL, it's proven a huge hit, even though it's gotten mediocre reviews. (Joe Dante made the point in an interview I did with him recently that horror films are always popular in times of great social unrest, and the success of these two films seems to be proving his point). HOSTEL is the more coherent, more narratively "effective" film, but also the far more suspect, politically, since its point seems to be to blame antiAmericanism on corrupt and perverse European tastes -- while situating Americans as the victims, and not perpetrators, of torture, and in fact morally requiring them to become torturers in order to "fight back." I suspect it taps into the same unease as SILENT HILL -- a guilt at knowing what has been done in the name of preserving the creature comforts of Americans, and a fear that we cannot possibly expiate that guilt -- but in HOSTEL's case, the guilt is displaced, and Americans are ultimately vindicated and absolved; this seems an immoral and false move, to me, and seems to place HOSTEL roughly in the team Bush camp, helping to cover over Abu Ghraib guilt rather than holding viewers to account -- whether it knows it's doing this or not seems of little account. In SILENT HILL -- which ultimately (spoiler! -- highlight it to read it, if you don't care) takes as its bad guys a group of New-World type Christians -- the sins that must be atoned for are much closer to home, and we/the protagonists are left in a more compromised, thought-provoking, morally ambiguous position -- all of which I like considerably.

The story, very quickly: a young girl, after dangerous episodes of sleepwalking, shrieks "Silent Hill," the name of a deserted West Virginia town. Her mother (by adoption) drives her to the town, to try to find the cause of these episodes; after awhile, the father follows. The mother and young girl find that the town is a ghostly, strange place where bizarre and evil things happen. The girl is separated from her mother, and the mother -- along with some characters she encounters along the way -- tries to solve the mystery and rescue her daughter from the evil at hand; the town is figured as a sort of purgatory where sins must be atoned for, though the film doesn't necessarily explain why the central character must atone for anything.

Some of the flaws of SILENT HILL are as follows:

While I enjoyed the video game immensely -- tho' I've only played the second installment -- and am glad that the film captures the "look" of the series, with its creepy atmospheres and alternately ashen/moldy environments, a movie is not a video game, and really shouldn't feel like one. One scene where the main character finds a flashlight in a drawer feels exactly like you've just added an item to your inventory; another where we are dared to look in the mouth of a corpse to retrieve a clue has none of the effect that a similar scene would have in a game, simply because your hands aren't on the controls. Ditto, the constant walking through fog, the sound of footsteps, the need to explore creepy environments, memorize maps, etc.; they all feel like too-direct transcriptions of a game scenario; more effort in translating the idiom was required. Filmed novels shouldn't make you feel like you're reading, filmed plays shouldn't leave you feeling like you're watching characters on a stage, and filmed video games shouldn't make your fingers twitch with the corresponding keystrokes.

Another problem: the film tries to "explain" what is ultimately an inexplicable scenario. Since we're left confused anyhow -- and the film is quite gutsy in how vague it allows itself to be at various points -- it would have been fine with me to not have to sit through lengthy expositions and declamatory, "clarifying" speeches, which only serve to bog things down. In a video game, where you've committed ten or twelve hours to your explorations, a lengthy explanation of what's going on is proportionate, but the film, clocking under two hours, would have been more effective if it had left more stones unturned (or managed to flip them more elegantly). It doesn't quite seem to trust its viewers enough, and this ultimately lends to the sense that the film is a bit of a mess. Better to not try to explain yourself at all than to try so hard and fail.

Finally: the climax of the film is a particularly ludicrous eruption of spectacular violence, with (spoiler!) various fundamentalists being ripped apart by demon-animated barbed wire. While that has its own charm, the film began to remind me of RAIDERS OF THE LOST ARK at this point, and given how subtle and creepy it manages to be much of the time, that's a shame; it smacks of pandering and radically changes the tone of the film, making it a Hollywood spectacle movie when it doesn't need to be. On the other hand, it's quite surprising, given the degree of violence at the climax, that the film manages to cop out on one piece of suffering it shows that really matters, (spoiler!) where a character we care about is burned alive. The character is underdeveloped to begin with, such that the martyrdom is somewhat meaningless, but since the film purports to deal with the Christian persecution of witches in 17th Century America (the explicit "guilt" that the characters must work their way through in order to restore family harmony), we can't really be "let off the hook" without seeing this character suffer. There are some nice bits where we see (spoiler!) the skin begin to peel off her face as she is lowered over flames, but the film needed to do a full-on PASSION OF JOAN OF ARC and didn't. How can we expiate guilt sufficiently if we only see the bad guys suffer? The film misses an opportunity to sully us.

Here are some interesting things about the film:

The women and the men engage in separate dramas, facing different adversaries and undergoing different trials; the women must deal with women and the men must deal with men. This is interesting and opens the door to interesting gender-political readings of the film, if you want to go there; motherhood is obviously meant to be a theme of some sort. I'll leave it to someone else to puzzle that stuff out -- it didn't really excite me as much as it could have -- but clearly someone somewhere -- Roger Avary? -- had his thinking cap on.

There are moments early in the film, where we still don't know what's going on, that evoke other American guilts in ways that are singularly fascinating. There is a scene where, for instance -- in a destroyed town where ash falls from the sky and the atmosphere is poisoned by the lingering effects of the damage -- the main character is pursued by charred, glowing mutants. One immediately thinks of Hiroshima, another bit of American guilt that is generally denied/suppressed/pushed out of mind, but upon which at least some of middle America's creature comforts depend. Given that the video game series emerged from Konami in Japan, it is very possible that the invocation of the atom bombing is deliberate, if somewhat buried; even if it isn't, it's interesting that the film led me there. (Would be curious if anyone else interpreted this scene that way).

As befits a horror film, there is an abundance of other creepy and unsettling moments, too, and the inventive iconography of the game is carried over intact, with dark nurses, blade-dragging Pyramid Heads, and acid-spitting zombie-things; these are beautifully handled and spooky to look at indeed, even if the film doesn't give us any clue what they might mean (I guess they wanted to save some exposition for the sequel). It is hard to imagine a fan of the games not liking SOME things about this interpretation; it could have been far, far worse. The film also seems quite hostile to aspects of American culture that are worth being hostile towards, and even tho' its invocation of the (spoiler!) persecution of witches is handled a little ham-handedly and incoherently, that someone somewhere has their heart in the right place; so bring on the barbed wire. Worse horror movies have been made, with less sympathetic politics -- Robin Wood would like it.

(Is it unfair that I give Avary credit for the things I like about this film? But I enjoyed KILLING ZOE, and thought THE BROTHERHOOD OF THE WOLF was poop. Sorry, Christophe.)

One final bit of faint praise: SILENT HILL is an interesting experience in that it allows voyeurs like me to see what audiences are getting up to/getting off on/AFRAID OF. (Actually, on that note, so is HOSTEL). Sure, it all gets to feeling a bit like sticking a thermometer up America's ass, but how else can one tell the temperature? Those curious will find America cold, sweaty, and paranoid, haunted by demons of its own making.

In case you weren't clear on that.
Posted by Allan MacInnis at 7:03 PM