Bookscouting in Vancouver on a Pleasant Spring Morning 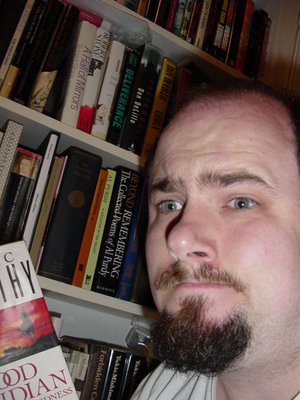 Getting ready to sell one of the last items in my Cormac McCarthy collection (now long gone, alas). I'd paid less than ten dollars for the US first of Blood Meridian, and considerably more for the UK first (which you see me holding here), but I couldn't afford to maintain the collection. It was a sad week, listing them on eBay... but it paid my rent that month.


I didn’t bother with the last library booksale, really. I wandered by late one afternoon, and scored a few interesting items out of boxes being just put out – one hardcover called The Decorated Body, while common, should go over well with the body-piercing crowd -- but to really do these sales justice, you have to come out in the early morning and be there when the thing starts. That’s when the bookscouts and bookdealers who have been queuing up for an hour or more are turned loose to gobble up the nicest items, ripping their way through the art section, the reference section, scouring the literature section for any modern firsts, grabbing whatever’s most valuable and, like a plague of locusts, leaving very little behind. They’re generally a humourless bunch; they can be civil in their shoptalk, sitting on the steps beforehand, talking about past finds, occasionally even giving each other tips, but once the doors open, most of them approach the matter with the dead seriousness of a starving shark, and I’ve had a few library volunteers comment that they can be downright rude, manhandling them to get at the new boxes they’re trying to wheel out (there have been stories of violent tussles over books; who wants that?). Not that I’m completely superior; there’s some dark adrenal rush that infects me, too, when I’m set loose in a competitive crowd, not unlike the surge of primal aggression I used to feel during high school wrestling matches, and I’ve gotten a few nasty glances from library volunteers, myself. I know that if I’m not the first to get at a new box coming out, or an unpicked-over section, the Darwinistic nature of the game will see me lose out to some OTHER shark; it’s generally a matter of survival of the rudest. But I don’t like offending people; nor do I care to receive the scowls and occasional disparaging comments from the mere readers, grazing in the aisles and blocking our way to the better books, idly browsing through some crappy thriller wondering if it's worth reading, when so much important matters are at hand. These more bovine types tend to resent the pros for their voraciousness and thrusting arms and I’ve had a few conflicts with them, as well. No, really, these big downtown booksales are not for me; I enjoy a nice leisurely scout, perhaps at an out of town library, or at a thrift store that doesn’t have some predator in the back room siphoning off the nice items before they even make the shelves (or some other local bookscout lurking in the aisles, the sadness in his eyes as I enter telegraphing immediately that the thrift store has long-since been picked over). Swimming in those sorts of waters is less lucrative, but, since I’m usually the only shark there, it’s far less stressful. Beside, for me, bookscouting is more of a hobby than a vocation, and I’m certainly, thank God, not dependent on it for my living.

The thrift sale this morning at St. Andrews Wesley was a bit less of a feeding frenzy, thankfully. There weren’t quite that many sharks this time, and the books were good enough that it seemed like, of the five or so pros there, all of us ended up taking out as many books as we could carry. One of my old tricks is to go straight for the paperbacks, at such sales; bookdealers are generally looking for higher-end items and tend not to bother with the paperback section, and in this case I was handsomely rewarded for the strategy: there were stacks and stacks of Patrick O’Brien novels, a few of Bernard Cornwell’s Sharpe books, a nice Gandhi book, a copy of Plagues and Peoples (it’s not Jared Diamond but it’s an easy sell), and even a copy of John Dunning’s The Bookman’s Promise, the third in his delightful Cliff Janeway series, about a cop turned bookdealer, investigating book-related crimes. (They’re packed with fun anecdotes about books and bookpeople and make an entertaining introduction to the life, though needless to say, they romanticize things quite a bit). I loaded up my backpack and one box, paid $15, and will probably turn them over for around $125, selling them to the bookdealer that I work for; he'll probably double that in time, so he'll be happy, too. The most awkward moments came from having to deal with the thrift sale volunteers, who, time and again, wanted to begin conversations with me – friendly enough – about how much “good reading” I was going to get out of these books. It’s an awkward comment to respond to; to be direct and honest – who, me, read Patrick O’Brien? Are you kidding? These are worth MONEY – would probably win me little favour. I smiled and faked it. "Oh, yeah, nautical novels, just my cup of tea!" It's a lie told for a greater good, since, really (if you look at things from the right angle), I’m doing a public service: not only am I making money for my boss at the bookstore, but I’m rewarding all the customers who weren’t at the thrift sale, but will come to our bookstore (who will be happy to get their favourite novels at a considerable discount from the new price). The only losers are any of the casual readers who hoped to score at the thrift sale themselves... but they had the option of lining up early, and the mere readers at such sales seldom KNOW what they wanna read anyhow. If I hadn't grabbed those books, some other shark would've.

Anyhow, my finds are all bagged up and ready for the bus ride. It’s been a good morning. Maybe I can hit a garage sale or two on the way to the store – the other scouts are probably all glutted now, having earned their keep at St. Andrews. Me, I sense there is still a little money to be made today, out there in the world… Nothing like wandering the west end, from garage sale to garage sale, keeping the wheel of capital turning...
Posted by Allan MacInnis at 12:01 PM