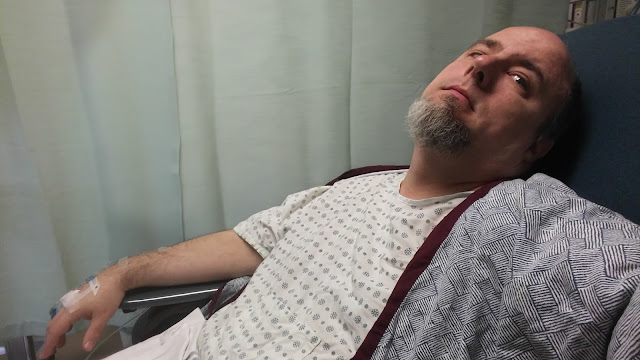 First off, I'm all right. I have a puppy training pad stuffed in my shorts as I write this - basically a giant, folded maxi-pad, in case I dribble; they were much, much cheaper than an adult diaper, which is what I was sent home in. (Thanks to my smart wife for this brainflash; puppy pads can be purchased at any Dollarama and cost a fraction of their human equivalent, for those of you with incontinence issues). Now that the anaesthetic has worn off, the dribbling appears to have stopped, but it burns a bit in my urethra when I urinate; my pee has a pinkish hue (or did yesterday); and it doesn't take long for my bladder to feel uncomforably, even painfully full. Plus I have a bit of constipation, also caused, I think, by the anaesthetic.

But for a guy who had tubes stuffed up his dick yesterday, I'm doing just fine.

I also still have a kidney stone, 6X9 mm, jammed up my left ureter, apparently exactly where it was before I went to the hospital. I would feel much, much better about my experience yesterday had it actually been effective in removing this blockage. My urologist DID manage to get a stent into my ureter, so the urine can now flow around my stone - which is definitely something - but - I had not realized this - apparently yesterday's treatment was kind of exploratory, of a "let's go in and see what we can do" variety.

The answer, sadly, was "not much." 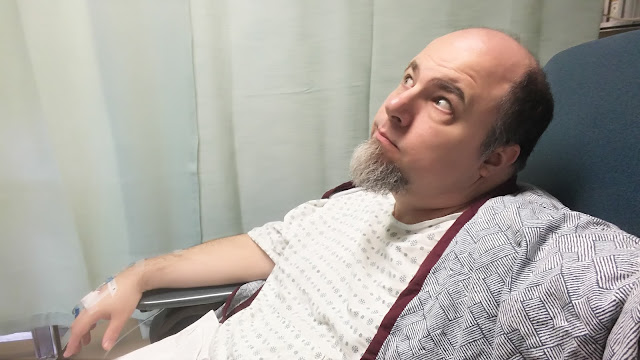 Pretty sure my urologist was more definitive when he initially described the procedure to me two weeks ago, but okay, whatever: apparently my kidney stone is not in a place where it is accessible. The lasers and cameras and other mysterious technology that went up my penis, through my bladder, and into my ureter yesterday could not get far enough up into my tubing, as my buddy Mark has put it, to "blow up my Death Star." So I will have to go for a different procedure, involving heavy vibrations, at VGH. I'm not even sure what the hell it is called, or what the side effects to THAT will be. (No one warned me about urinary incontinence yesterday, though in hindsight, it makes sense; what will being vigorously vibrated about the guts do, I wonder?). Maybe I would rather have cut to the chase, on that, and spared myself the experience yesterday, had I known it might not be effective, but I guess I'll try to have some equanimity here. I got a stent. I am almost fully recovered. It was nowhere near as bad as I imagined it would be.

And while it may not have actually solved my problem, it was still an interesting experience, as those of you who follow me on Facebook will know. I got to have my feet in stirrups, just like a woman giving birth. (I was pretty much knocked out by that point, with a spinal shot and a general sedative, so my memories aren't very clear about that. I kinda wish I had pictures to show of it). I spent about three hours numb from the waist down, with nurses using ice to determine how effective the freezing was, moving it down my body to see where I was frozen up to ("is it cold?" became yesterday's equivalent of "Is it safe?"). I got to have first hand experience of the whole "wiggle your big toe" trip from Kill Bill, which scene I have new appreciation of. (Apparently my left big toe comes out of anaesthetic much faster than my right). And I had the singularly strange experience of feeling like there was some sort of small stuffed animal in bed with me, an odd lump between my legs that, on further investigation, turned out to be my penis. (As senstation returned to my feet and groin it felt like my dick and balls and the bottoms of my feet were all made of pillows).

And while the what's-that-oh-it's-my-dick moment was probably the high point of weirdnesses, there were, indeed others. At some point, for instance, I apparently involuntarily ejaculated, with no erection, because I could sniff semen on my fingers after touching myself. When I could finally stand, in order to demonstrate to the nurses that I could urinate and was therefore fit to be discharged, I got to Tim Conway my way from the bed to the bathroom, leaning  into the porter with my IV bags on it, dribbling urine every step of the way. Usually Erika gets annoyed with  me when I pee on the floor, but apparently yesterday I had a free pass. It has, further, been some time since I wore a diaper (which was soaked with pinkish pee by the time I got home; alas, we didn't think to ask for a second one to change into, which is where the puppy pad came in). All of these count as life-lessons, I suppose - a sort of practice-run on my old age. I probably didn't need to re-learn how little I like having tape ripped off my arm, though it may encourage me to shave my arms a bit before I go into VGH for phase two of this procedure.

But I'm home, I'm safe, and while there was probably wisdom in keeping a puppy pad on, I am no longer leaky, apparently. Sometime in March, I get to get my guts vibrated. We'll keep you posted on how that works, I guess.

Meantime, I leave you with this Frank Zappa song. Maybe you know the one...
Posted by Allan MacInnis at 8:51 AM

Anyone who does not care for music journalists would have got a special kick out of that story. Hope the same crowd is not quite as pleasured about your further generously shared experience with vibration. If you think you might involuntarily ejaculate again bring along a target for the disintegrated bits of stone to score points on. 180!

It was not a projectile ejaculate, thank God. Musta just oozed out when I couldn't feel a thing down there.

For those seeking more detail (?!), two days later and there's intermittent pinkness in my pee but the main issue is pain - a stab in the gut where I presume the pee is flowin' through the stent. (Sometimes it's a pain in the bladder, too - and the pee burns my urethra a bit coming out). It ONLY hurts when I pee, though, so there's that.

Don’t worry - it will project the stones that do not break down small enough to prevent pressure forming behind them!

Day six post-op: if I exert myself at all - if I take a walk, go up stairs, ride a bouncy bus - I still pee pink, sometimes almost pink-grapefruit-juice colours; and frequently there are burning sensations in my urethra as the liquid passes, especially the last little trickles. There is also occasional pain the bladder and belly from the stent, though it is more like a dull ache than a sharp stab. Sitting down when I pee seems to help that particular pain a bit. The worst of it has been the interference with my sleep: there is a feeling of urgently needing to urinate which, the other night, woke me up at 3am, and wouldn't subside, because even after I peed, I still felt like I needed to pee (and I can pee seven or eight times in an hour if given free leave, so it isn't entirely an illusion, though sometimes there isn't much to come out). But I took a sleeping pill last night and managed to get over six hours in - I still woke up before the alarm, but at least I slept okay for awhile. Interestingly, the burning sensations are much lesser when I am peeing from a full bladder than a nearly empty one...

...anyhow, I guess that's it for this thread, but Monday will see what the Shockwave brings. Annoyingly, I have to fast from Sunday lunch - can only take clear fluids (so my blood sugars stay up). After X rays or whatever to pin down the location, they'll lie me on a table, put a water pillow on me, and blast me with targeted shockwaves, after which I will supposedly (if it works) pass the chunks through my stent (which stays in til March 28th).

More to come, no doubt.

Speaking of which, I jerked off today! First time since the surgery. It still works!

...And I had ALMOST no blood in my pee. A couple little clotty bits came out but in pee that was otherwise yellow.

I feel quite a bit better than I did yesterday. Stayed home, marked papers, looked at the snow from the window, petted the cat. Goin' to bed with my wife. We're needing light entertainment so we watched Baywatch with the Rock on Netflix and I must admit, I was thoroughly entertained; I usually don't find stooopid movies that fun but it's pretty smart for stooopid.

I kinda wish my employers had called a snow day for tomorrow. Because they didn't, and because they won't actually BE at work, I strongly suspect I'm going to have to make an hour and a half trek across town buried in snow to arrive at a closed school with no students. I sure hope they pay me in a case like that. But, whatever - I was feeling pretty awful this time yesterday, and I feel mostly fine today. Even the burning sensations are under control. And even if there are no students, there's a thrift store next door, and I'm not totally broke, so I can poke around a bit. What the heck.

I continue to work. I continue to bleed. The most interesting parts ofcthe shockwave lithotripsy were being dosed while conscious on remy fentanyl ("the cognac of fentanyls." perhaps?), which more or less confirmed to me that I find opiates boring, and some bedpan follies which I am electimg to leave undocumented. Sorry to anyone who had to clean up after me. I am feeling a bit better, but peeing into a funnel, to collect stone fragments, of which I have seen little evidence - either because the cocksucker is still inside me, insulated from the shockwaves by my fat, or because I peed all the dust out already. An X ray next week should be revealing. Meanwhile... No rest for the wicked (or stented). I still wake up having to pee, I still have to work, and I still pee pink. No news is no news. Whee.

Nothin' much to add but more of the same. I was okay for a bit last night and this morning but now it is pain and blood. Oww. But at least I can rest tonight... Sorta...

Hi Allan I couldn’t understand what happend to you.
I hope you are doing well.

Thanks. I am okay but working too much for how I feel. I need some time off - at least til the stent is out! But bills, rent, etc...