Taqwacore 4: About those photographs 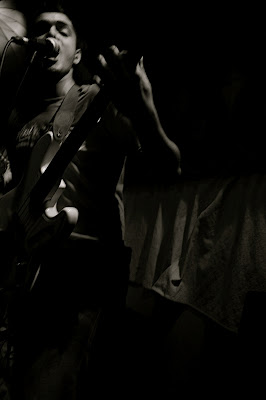 Photograph by James Moreau Drew, not to be used without permission

James Moreau Drew, who took The Kominas photos you see on these past posts, has a Flickr page with much much more, for the record. I asked him to give me a bit of his background re: The Kominas and photography. He writes:
I've been friends with Basim since beginning of 9th grade so I've known him for 11 years now. I've known him throughout his time in other bands and ended up being friends with most of the taq's people through Basim, it's always been the music, punk and being prone to do crazy shit and intellectual mindsets that have kept me hanging around a lot of these guys so really the other side of the music scene a bit. But as someone who is studying social sciences and anthropology and has always been interested in such things learning about this in a cultural sense and learning stuff about my friends life and experiencing a world I would normally not be exposed to naturally keeps my interest.
I've been photoing for about 6 or 7 years now but have had times where I haven't really even had a camera. It's been an extension of my memory as I'd want to go to shows and then when thinking back on them look at photos and see if I can really spark some deeper memories and insights into them. Same for as going to shows and being into punk music the bands tend to shift or break up fast, or you end up too drunk and I hate forgetting so I like to recall what was happening. In this sense I've further gotten into trying to be a documentary photographer and taken some photography classes at community college and Harvard in the last few years and feel the within the last year I've gotten a lot more serious about trying to be a really competent photographer and interested in the world around me. naturally I've been documenting the Kominas since the first gig (and Basims band Malice in Leatherland before that, though I didn't always have a camera).
So in sum, I came about photographing the Kominas out of being friends with them and wanting to photograph bands I've seen events I've been to and more so lately because of classes or that I want to apply my knowledge I've learned. Kim Badawi has also been a huge inspiration for me. I also think the Kominas are a very good band to photo and generally gives me something productive to do other than standing around.