Iron Maiden at Rogers Arena: the Legacy of the Beast in Vancouver

"How many times have you seen this show?" the guy asks me, and I tell him, "hell, I haven't seen Maiden since 1983!" He chuckles: he's seen the Legacy of the Beast show - a vast recap of Maiden's greatest hits - fifteen times already, and has, in his life, seen Iron Maiden over 200 times, he figures. He's apparently friends with Steve Harris, which might help, but I suspect he also has a bigger concert budget than I do. "The best places to see them are in Quebec City and Montreal," he tells me, and what can you do but believe him?

We're backstage at Rogers Arena, where my successful ticket-cadging has unexpectedly led to a VIP pass to the hospitality room (I nab a Heineken, Erika a Schweppes) and two free t-shirts (no small thing, since they run $55 a pop). My wife, who is not particularly a metal fan, is very amused by the shirts - her second metal tee, after Unleash the Archers - and we duck together into a washroom to try them on. She gets into the spirit of things, throwing the goats and making a "metal" face worthy of Heavy Metal Parking Lot. It's silliness for her, but it's set the mood for a fun night, and she definitely has that. Never did I assume our wardrobe would include two matching Iron Maiden shirts. 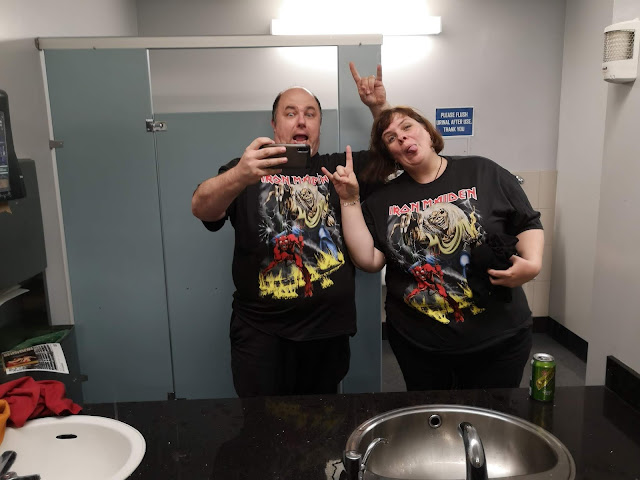 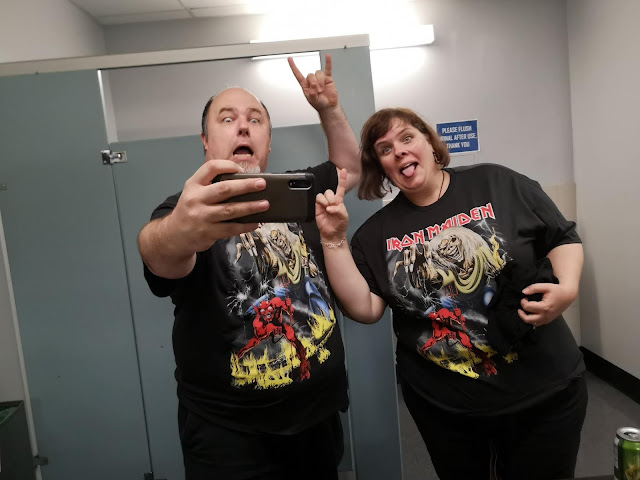 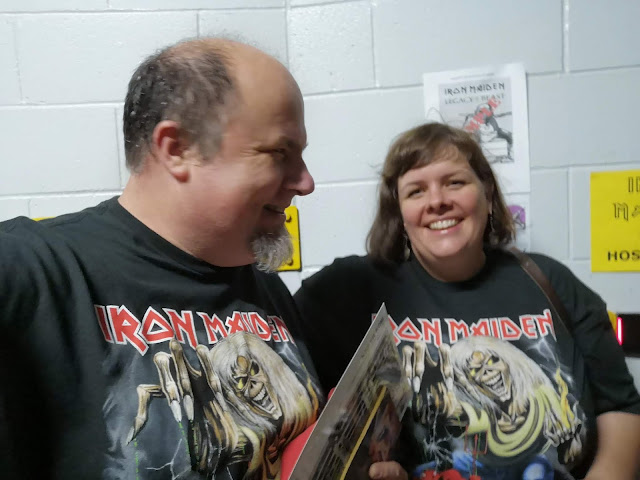 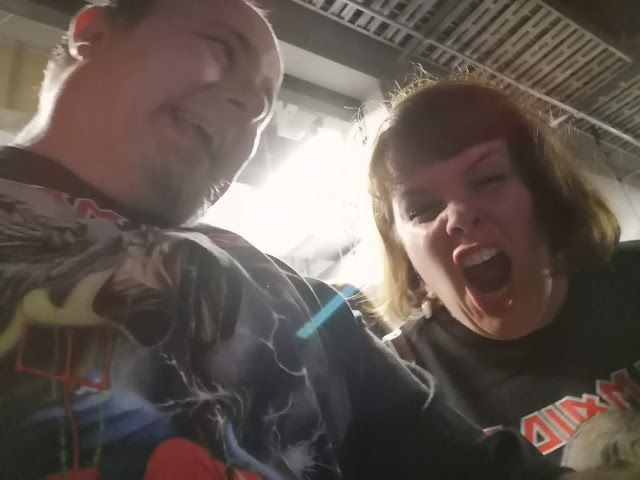 Throughout it all, I'm carrying a 8X10 glossy of Maiden from 1992, tucked into an Ed McBain paperback for support, so I don't wrinkle it or sweat much on it. Though I've brought nothing of my own to get signed, I've run into Gerald "Rattlehead" Yoshida, with a veritable backpack of stuff he's hoping to get scribbled on, and offered to try, "just in case" the band shows up in the hospitality room. They don't, at least not while Erika and I are there, though I'm not 100% convinced I would recognize anyone other than Bruce or Steve, if they materialized; so I'm left minding Gerald's publicity shot for the rest of the night. Later on I'll be permitted down to the floor to see if I can find him and give him the photo back, but he's not all that tall, and there's a lot of people, so all that comes of it is a glimpse of just how many different Iron Maiden t-shirts there are to be seen. (There are also a few Motorhead and Slayer and Cannibal Corpse and Behemoth and AC/DC shirts to be seen, too, and even one guy wearing a Bad Religion tee; at one point I tap a guy on the shoulder and ask "is that an Arkona hoodie? ...See you at the Rickshaw!"). There are kids younger than I was when I saw Maiden at age 15, and adults in faded shirts from shows that might even predate that 1983 concert, broken out only for special occasions. 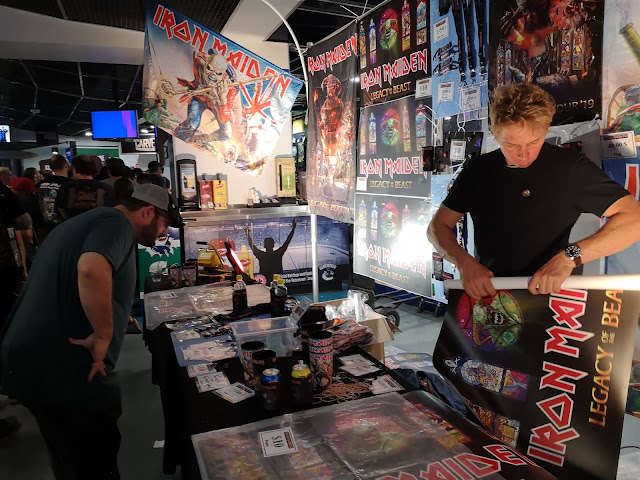 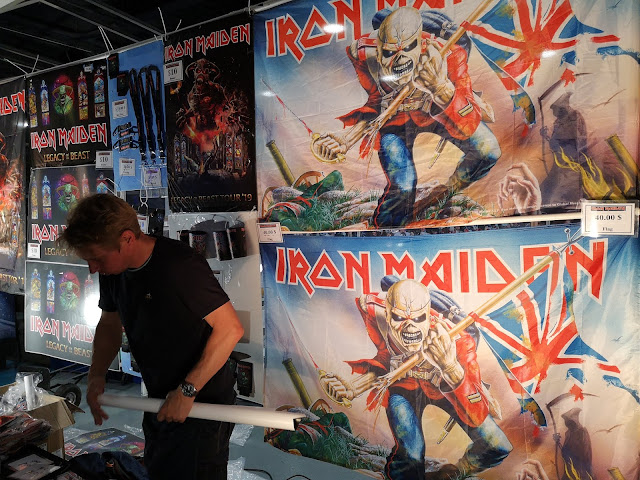 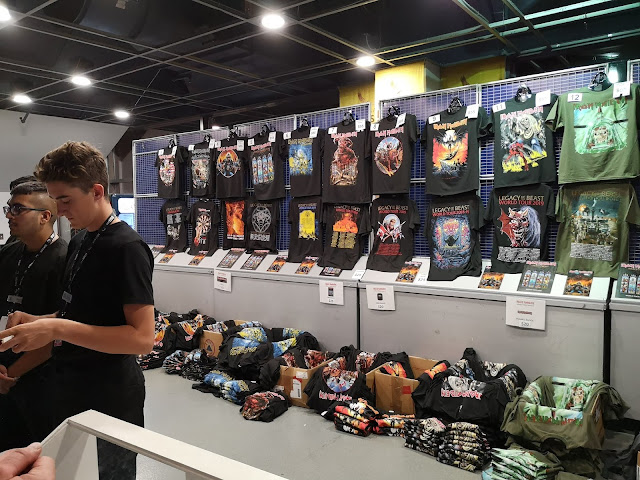 But the Raven Age - the metalcore band of the son of Steve, George Harris - starts while we're still in the hospitality area, and Erika and I rush to take our seats. We are opposite the stage, but with an excellent, straight-on view. Truth be known, all metalcore sounds kind of alike to me - it's not a genre that I really have a great fondness for - but the band is appealing enough, and have some inspired audience engagement techniques, asking us, for example, to take out our phones and turn on our flashlights for "Grave of the Fireflies," off their album Conspiracy (like father like son: it's a song named after a movie). The arena lights up in a way I haven't seen since the days of the Bic lighter, which, yes kids, we used to actually hold up in the air in a non-ironic way as tribute to bands onstage.

Prior to the start of Maiden's set - long posted online and followed religiously - there's a brief clip on the video monitors at either side of the stage of an Iron Maiden-themed videogame, where you can "play" Eddie in various scenarios based on Iron Maiden album covers and t-shirts and such. You can kill someone with a hammer, like the Eddie of Killers, for example, or be electroshocked in your straightjacket as with Piece of Mind. There's lots of war-themed stuff, too; one gathers Steve Harris is a history buff.

Once we get to "Aces High," the opening number - introduced, as always, with a clip of Winston Churchill - we see the first bit of amazing stagecraft of the night: a replica Spitfire which flies in place over the band. There's also, in the course of the evening, a surprisingly early visit from Eddie (who trades sword-blows with Bruce Dickinson during "The Trooper," which, I discover from the backdrop, is not in fact a Civil War song - which is what I'd always previously assumed, not having read the lyrics closely. From Eddie's red coat onstage, you might guess it's about the American revolutionary war, except that doesn't explain the mention of Russians. In fact, it's about the Charge of the Light Brigade!). 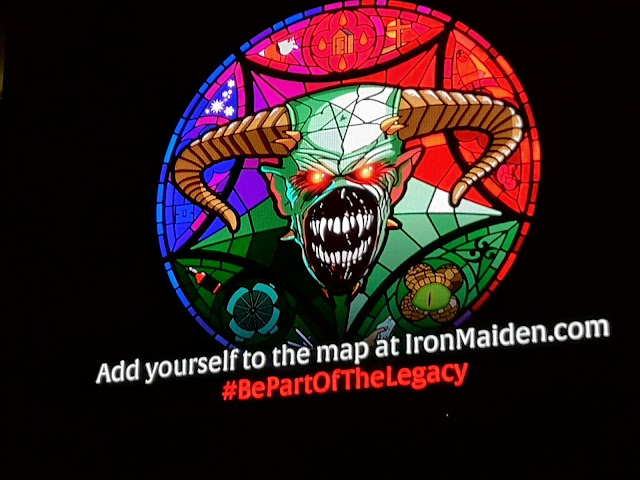 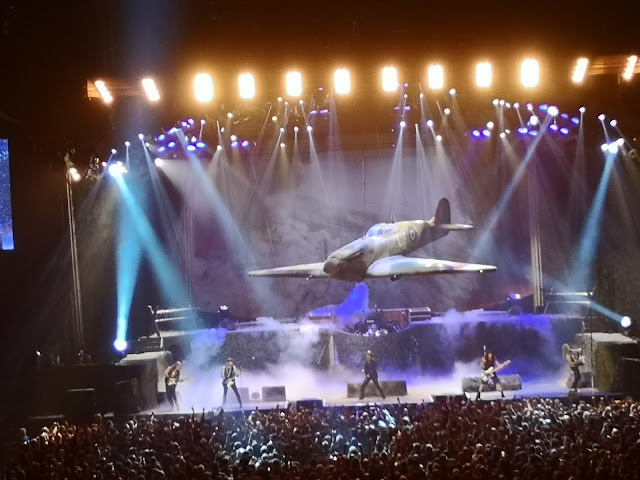 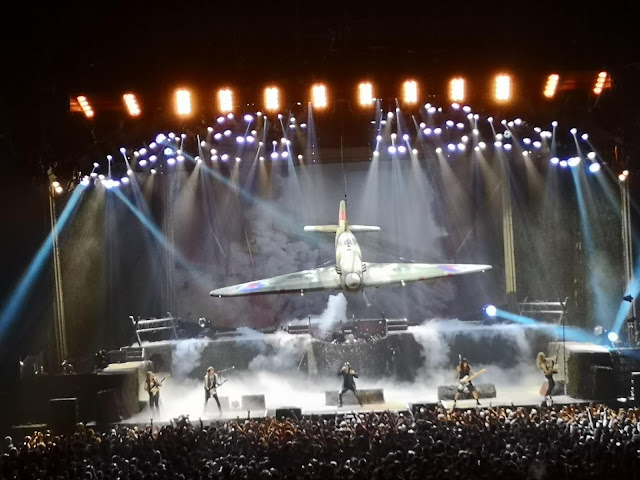 Other bits of stunning stagecraft include a gigantic stained-glass backdrop (for "Revelations" and "For the Greater Good of God"); a gigantic Icarus with wings that fold when it falls at the song's end, plenty of fire - including flamethrowers wielded by Dickinson; a painting of a "Wicker Eddie" (for "The Wicker Man"); surreal tableaus of religious martydom ("The Sign of the Cross") and a giant horned Eddie-head that rises above the drum riser, red eyes lighting up as it appears to look around. The band has gone to great lengths and expense to make this show impressive and memorable, lavishing spectacle on their fans; at one point, Erika likens it to going to the opera. Photos from afar can't really do it justice, but I try: 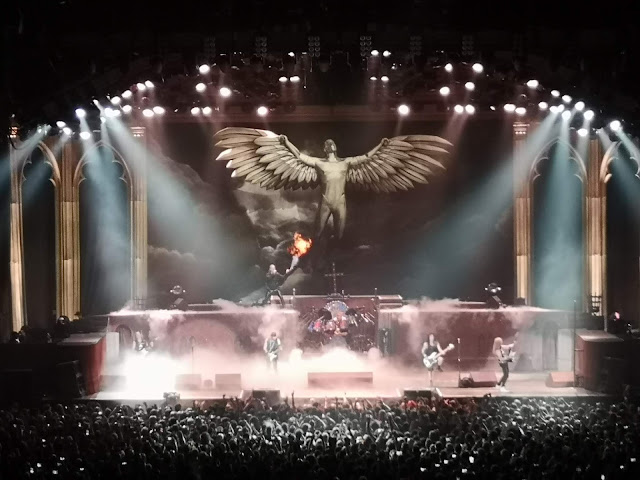 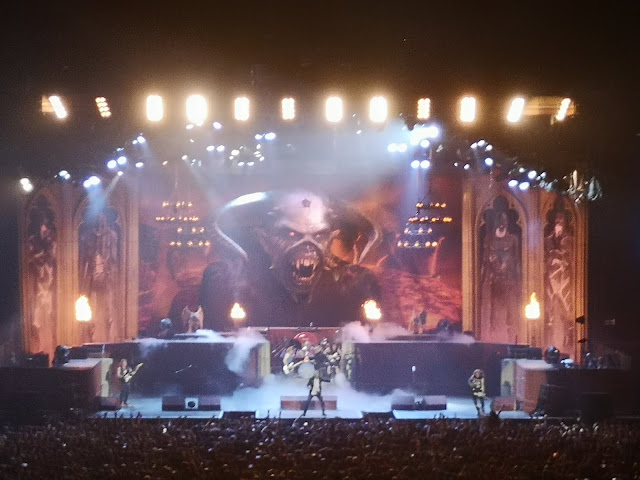 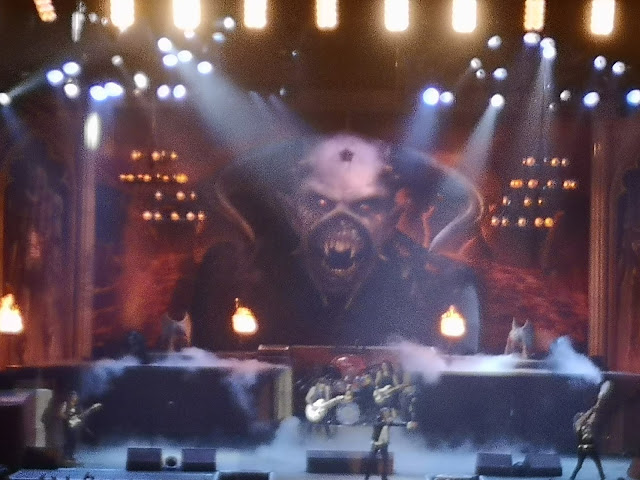 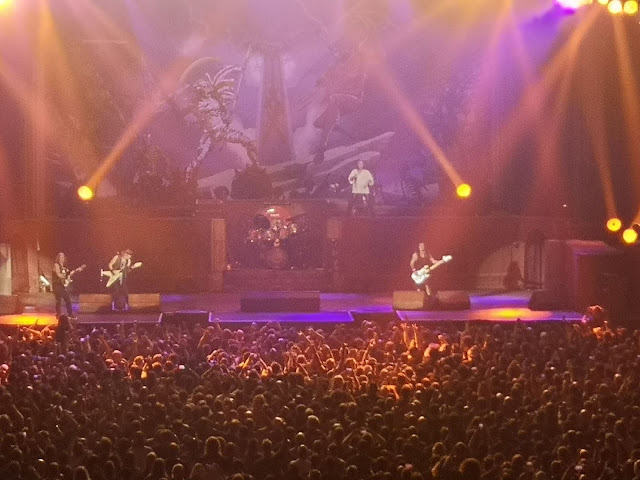 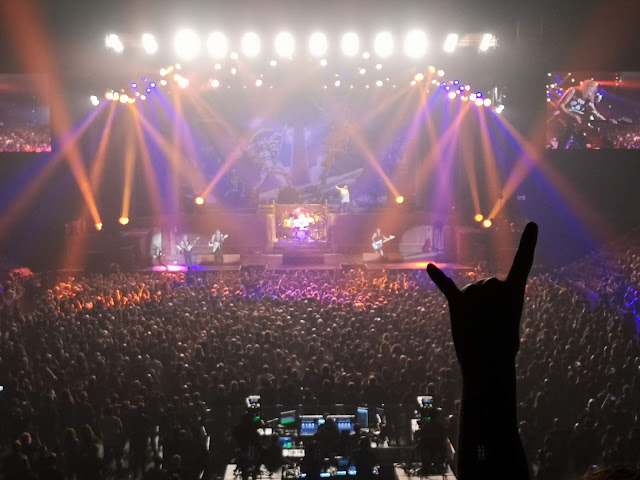 The longest bit of stage patter during the night came from Bruce Dickinson, introducing "The Clansman," about William Wallace (which is where he'd first broken out the sword). He poked fun (I think) at bands who don't know what part of Canada is what, greeting us with a "bonjour" (to not-so-serious boos); mused on the different receptions to the word "freedom" in Canada (polite) and the United States (rabid); quipped on how odd it was to cast an Australian as a Scotsman (but no odder, he added, than casting Sean Connery as a Spaniard in "The Highlander"); asked us if any of us had Scottish ancestors, which, indeed, some of us did; and urged us, if we went home to write about the night on the internet, to spell Clansman with a "C." Done! It was nice, in fact, to see that he spelled that out for people, since, you know, these are kinda politically dodgy times we're living in.

Most of the rest of what's said during the course of the evening are variants on "Scream for me Vancouver" or "Scream for me Canada!" The audience, of course, screamed (and at times sang) quite enthusiastically, but no one was more enthusiastic than the fella directly in front of me in a Cannibal Corpse t-shirt, who leapt about and thrust his devil's horns into the air a thousand times during the night. Since the band was tiny, from where we were - and it seems kinda silly to take pictures of the video monitors - I ended up trying to take as many good photos of his thrown goats as I can. Call it "the Goat variations," offered to the guy in row 21, section 112 as a souvenir of his experience: 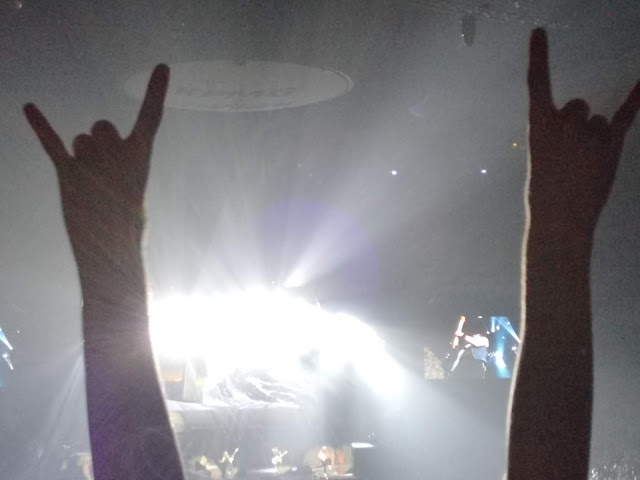 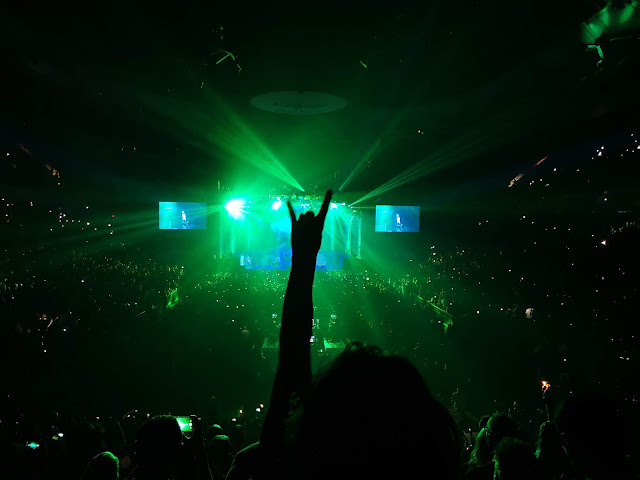 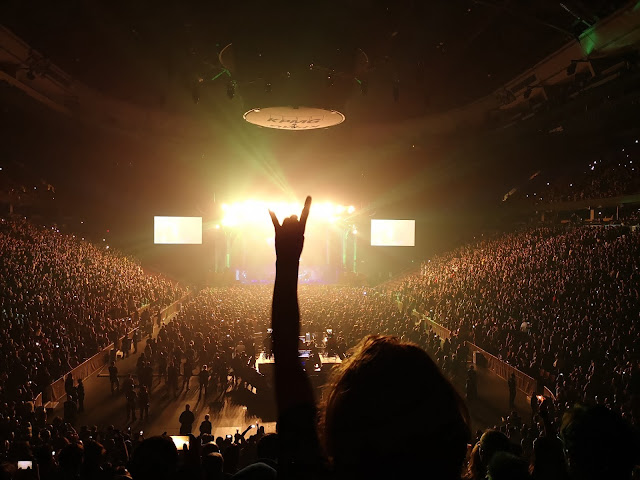 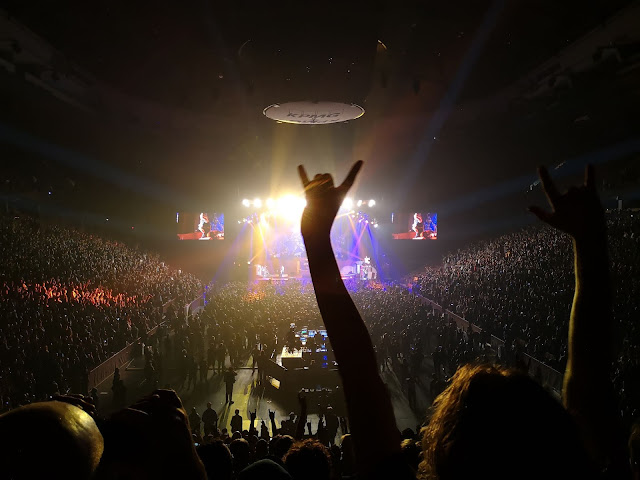 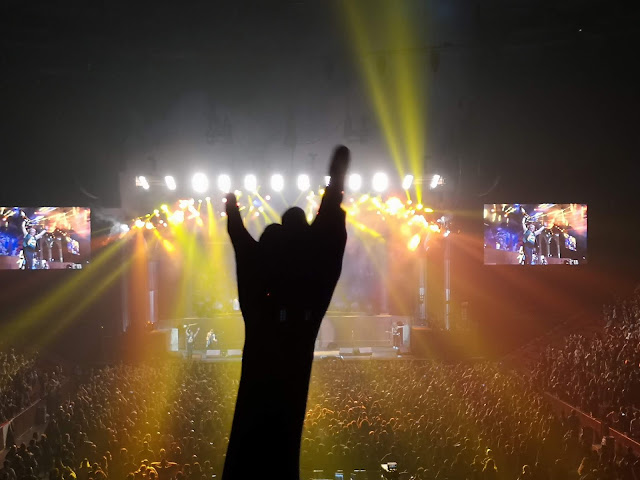 All told, it's a superb way to tie off the circle, to revisit a band that I loved at 15, but haven't paid all that much attention to since, even for awhile was quite snobbish about ("it's kidstuff," I would have said, during my free jazz years). Their commitment to what they do, and the extent to which they  please their fans, and their apparent total engagement, were all truly outstanding, and they had no less energy or enthusiasm onstage than they did 36 frigging years ago, making me, kinda, feel like I was fifteen again, too. Which doesn't happen often lately!

The last word goes to Vancouver rockabilly whiz Paul Pigat (himself soon to play in Vancouver, for a September 21st birthday gig with Cousin Harley). He writes of the night:


What an awesome show! I literally haven’t seen a stadium show since the early 90s and I’d forgotten about the pageantry of it all. Last time I saw them was '85 in Toronto. I think they still function at the same heightened energy that they did back then. I really liked the lighthearted vibe they had on stage. You gotta admit it looked like they were having almost as much fun as the audience. Not an easy thing to do when you’ve been in a band for over 30 years. And hey, when you have your own Spitfire hanging above u for the start of the show u truly are metal gods!

Couldn't have said it better: awesome show indeed. And to everyone involved in facilitating the great time my wife and I had last night - thank you! (I think I've finally sunk the metal hook in her! Who'da thunk!).
Posted by Allan MacInnis at 9:45 AM