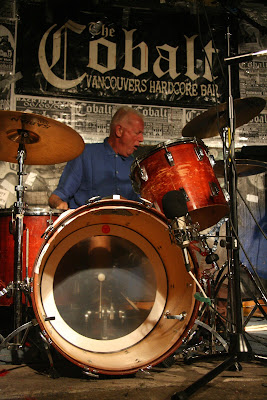 Han Bennink at the Cobalt 1.0 (RIP), at a 2007 jazzfest splinter show featuring Eugene Chadbourne and Robots on Fire. Photo by Femke van Delft, not to be reused without permission.


Gotta confess: not feeling very excited about the Vancouver International Jazz Festival this year. Last year, despite some dissent on the wings about the way things were being done, there were some really inspired and exciting programming choices, including visits from Sublime Frequencies' recording artists Group Doueh and Japanese sax virtuoso Kazutoki Umezu's KIKI Band. This year - I mean, if I had a lot of money, freetime, and lived in Vancouver, I might go see guitarist Terje Rypdal or improviser Ig Henneman, but there's not a lot else that excites me. The move from Gastown to downtown seems to bring the jazzfest closer to the world of the Canucks, the Olympics, and the Granville Street Entertainment Zone (or whatever the hell it's called); this can only bode an aesthetic move closer to the dispiriting mainstream of popular music -- a worry that is not at all assuaged by the fact that the program circulating around town looks like a brochure for cosmetics. Mostly the trouble is, though, that there's just not many names I recognize in it, let alone names of people whose work I follow and/or am excited to see play. Maybe I'm just out of touch with the improvised music scene? It didn't stop me from getting excited LAST year...

All that aside, there's one gig that I think anyone with even a passing interest in improvised music should go to see: Han Bennink, Brodie West and Terrie Ex of the masterful Dutch avant punk band The Ex, playing 9:00 on June 24th at the Ironworks. Bennink is a living legend of jazz, and beyond a doubt the funniest, most expressive, most performative drummer I've ever encountered - a true wildman virtuoso of free jazz. I haven't heard him play with Brodie and Terrie, but I have no doubt it will be quite unhinged and off-the-map. Some of it can be heard on Brodie West's Myspace here.... "Unhinged and off-the-map" doesn't begin to cover it...
Posted by Allan MacInnis at 5:08 PM