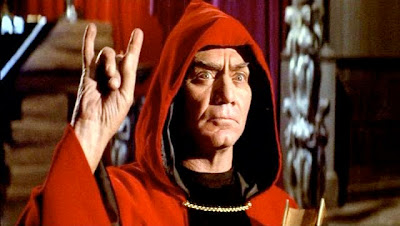 Yeah, you THINK you don't know who Robert Fuest is, but he directed The Abominable Doctor Phibes - AND he directed no less a film than... The Devil's Rain! You know, The Devil's Rain? Where Ernest Borgnine plays a Satanist (who melts!), and the supporting cast includes William Shatner, Tom Skerritt, Eddie Albert, Keenan Wynn, Ida Lupino, John Travolta (in a part so small it seems more fitting to call it a "smidgen" part than a "bit") and Anton La Vey himself, playing - you guessed it - the High Priest of the Church of Satan! The film is so much fun precisely because it takes itself so fucking seriously, to the extent of having a grimly protracted Boschian "climax" where Satanist after Satanist melts into piles of repugnant goo; we cut from one Satanic puddle to the next, while somber, evil music plays, long after the narrative point ("the Satanists are melting") has been established. Fuest, being interviewed for the commentary for the DVD, is unintentionally rather comical in his observations of this scene (in a good natured way, considering the commercial failure of the film was so pronounced it all but sank his cinema career): he did not have full creative control, was basically directing the film on hire, and whoever was bankrolling it (I forget who) insisted on the goo shots. Fuest himself is unconvinced of their value. Alas, now I will never get to explain it to him.

Seriously, folks: if you haven't seen The Devil's Rain...
Posted by Allan MacInnis at 8:04 PM