Glenn Erickson, Max von Sydow, and the dreams of pygmies Still from Deathwatch
Having an interesting, cinema-intensive correspondence with DVD Savant Glenn Erickson about Bertrand Tavernier's film La Mort En Direct (Deathwatch). He's done a two-part article on Wim Wenders' Until the End of the World - part one, part two - which, in the second half, compares that film with Tavernier's, finding several apparently non-coincidental similarities (including the presence of Max von Sydow, who pops up at the end of both films; as Erickson says, "all roads lead to von Sydow"). He reports that Wenders spoke about how he and Tavernier were collaborating on a film idea, and took it in different directions - hence the similarities. I find it interesting that other of Wenders films have occasionally resonated against earlier movies - see also this blogger's discussion of Alice in the Cities, Paper Moon, and Lolita, or consider the deliberate borrowings from Nicolas Ray's The Lusty Men in Kings of the Road. Wenders imagination seems steeped in cinema, such that images from other films, consciously or unconsciously, sometimes surface in his...

Another similarity between Deathwatch and Until the End of the World, however, is that both films exist in longer cuts not widely seen in North America, which is how he and I got talking about them in the first place (he found something I wrote on IMDB many years ago about the "long version" of La Mort En Direct, and, not realizing it was me - because we've corresponded before - wrote me). 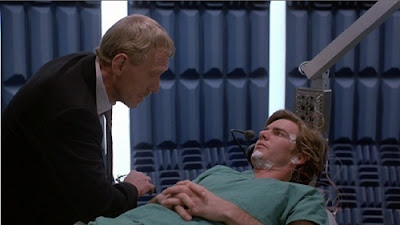 My big addition here is to bring up one of my favourite '80's SF films, Dreamscape (for which I have considerable more fondness than Erickson, who rather pans it here). I'd mentioned previously on this blog that it has a line that resonates with the Tavernier film. Though it has been some time since I last saw Dreamscape, and my memory has fogged, I believe Max von Sydow says something in both films involving dreaming pygmies, which surely cannot be a coincidence, and seems to suggest some deliberate creative input on von Sydow's part - as if he decided to stitch a resonance between the two films, which he made a few years apart. As Erickson's part two on Until the End of the World mentions, pygmies were to play a role in that film, too -- it's all getting rather strange, isn't it? Particularly if you note that in both Until the End of the World and Dreamscape, von Sydow plays a scientist working on futuristic dream technology...! 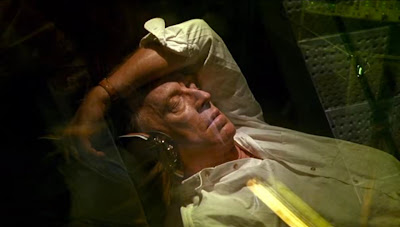 Still from Until the End of the World

(Note that ardent DVD hounds can find the long version of Until the End of the World either via an Italian DVD release, lacking English subtitles for scenes not in English, or a Chinese bootleg of the same that sometimes pops up in a cheapie Wenders box sold on eBay. Further, they can probably  track down the French DVD release of the European cut of La Mort En Direct, a terrific dystopian SF film about reality TV and the morality of images, starring Harvey Keitel, Romy Schneider, Harry Dean Stanton, and Max von Sydow; it's continued non-distribution in North America puzzles me, but it would HAVE to come out in the proper European cut, which is far superior to any previous VHS/ Laserdisc releases here. Dreamscape, meanwhile, being the cheesiest and "most Hollywood" of the films under discussion, is, of course, widely available!).

Thanks to Glenn Erickson for some interesting discussion!
Posted by Allan MacInnis at 3:56 AM