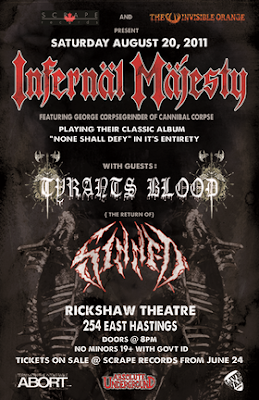 Canadian thrashers Infernäl Mäjesty take the stage at the Rickshaw tonight with affable, monster-throated Cannibal Corpse vocalist George "Corpsegrinder" Fisher on vocals. Wrote about it for the Straight here! (We talked a bit more than that, and I considered throwing down another quote or two here, but on reflection, most of the relevant stuff - his relationship with the band, his being a "lyrics guy," and his love of the scenery and fresh air are already present in the article. About all that didn't make the cut were his impression that BC'ers are a bit more laid back than Floridans - and the news that presently Cannibal Corpse will be returning to the studio to record their next album!).

Posted by Allan MacInnis at 9:51 AM