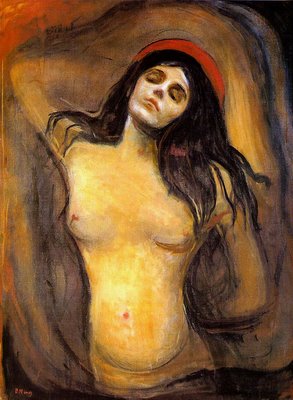 I have an interesting history with this image. I was inspired to buy a poster of it at the peak of my interest in this woman I was seeing awhile back. I framed it and hung it on my wall the very week she and I kissed for the first time. Later that same week, the original painting was stolen from a museum in Norway by armed thugs. It seemed a portent of something, tho' I wasn't sure what... tho' now that I've seen Peter Watkins' Edvard Munch, I realize that none of this should have been taken as a good sign... Grim (but great) film...

In any event: the original has been recovered, along with two copies of Munch's The Scream, stolen with it. Good news for the arts world! ...but who knows what it signifies for my love life...

In other news, apparently old X-rays were used in the Soviet Union to make LPs. Thanks to our intrepid overseas corresponded for the bizarre tip.
Posted by Allan MacInnis at 4:55 PM